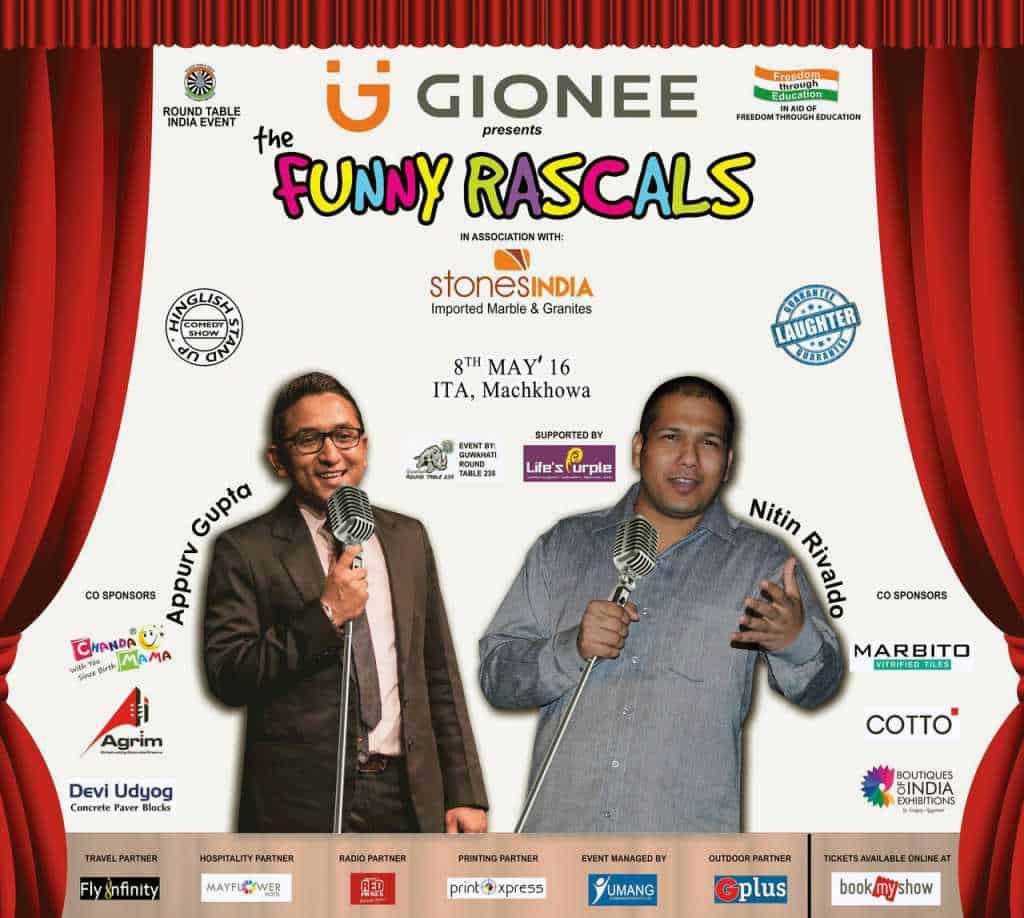 Guwahati Round Table 235, under Round Table India, has yet again taken up an initiative to help the underprivileged sections of the society. On Tuesday, the Table announced first of its kind Hinglish comedy show – The Funny Rascals – to be held at ITA Machkhowa on May 8. This will be a charity fund-raising programme for building the infrastructure of Shankardev Shishu Niketan in Dadara, near Hajo.

For the show, Guwahati Round Table 235 will be hosting noted comedians Nitin Rivaldo and Appurv Gupta, who are widely popular for Hinglish stand-up comedy acts. Stand-up comedy is a comic style in which a comedian performs in front of live audience, usually speaking directly to them. “The stand-up comedy scene in India is rapidly growing. We thought to bring it for the first time in the Northeast for a noble cause. The proceeds from the show will help us undertake the Phase 2 of the Shankardev Shishu Vidya Niketan, Dadara project,” said chairman of Guwahati Round Table 235, Rajat Sureka. Guwahati Round Table 235, with its present 20 members, adopted the school in Dadara under Round Table India’s flagship “Freedom Through Education” project. The Table aims to redevelop around 10~500 sq. ft. of the said school and on February 7 this year, bhoomipujan for the development of phase 1 (around 2,000 sqft) was done.

The show, to be held at ITA, Machkhowa on Sunday, May 8 from 5 pm onwards will see around 800 guests participating to help raise funds for the school infrastructure. Performing in the evening will be stand-up comedian Nitin Rivaldo who has done around 500 shows across the country. He will be joined by noted comedian Appurv Gupta.

“The show is being organized to raise funds to build a school for the under-privileged children. We will utilize the funds to build classrooms at Shankardev Shishu Vidya Niketan, Dadara and we are happy to announce that many people are helping us in this initiative,” said Manish Singhal, fund raising convenor of Guwahati Round Table 235.

The first Round Table was formed in Norwich, England in 1927. In India, the first Table was formed in 1957. The organization has members (referred to as “Tablers”) aged between 18-40 years and every chapter (referred to as Table) comprises of a maximum of 25 Tablers. Round Table India has now around 4,200 Tablers in around 280 Tables located across 80 cities and towns, comprising of businessmen, entrepreneurs, technocrats and professionals.

In Guwahati, there are 4 Tables whereas, there’s a solitary Table each in Shillong, Tinsukia and Jorhat. More Tables are coming up in Dibrugarh, Tezpur and other places.

Besides the adoption of the Dadara school, the Guwahati Round Table 235 has also renovated an abandoned classroom at Harijan Prathamik Vidyalaya, Fatasil. The Table, which was inaugurated on March 30, 2013, also organized a super specialty free health check up camp in association with Medanta Medi-City, Gurgaon and Downtown Hospital, Guwahati where 892 people participated. The Table also organized a free surgery & mega heath check up camp at Mirza where 1,046 people participated.