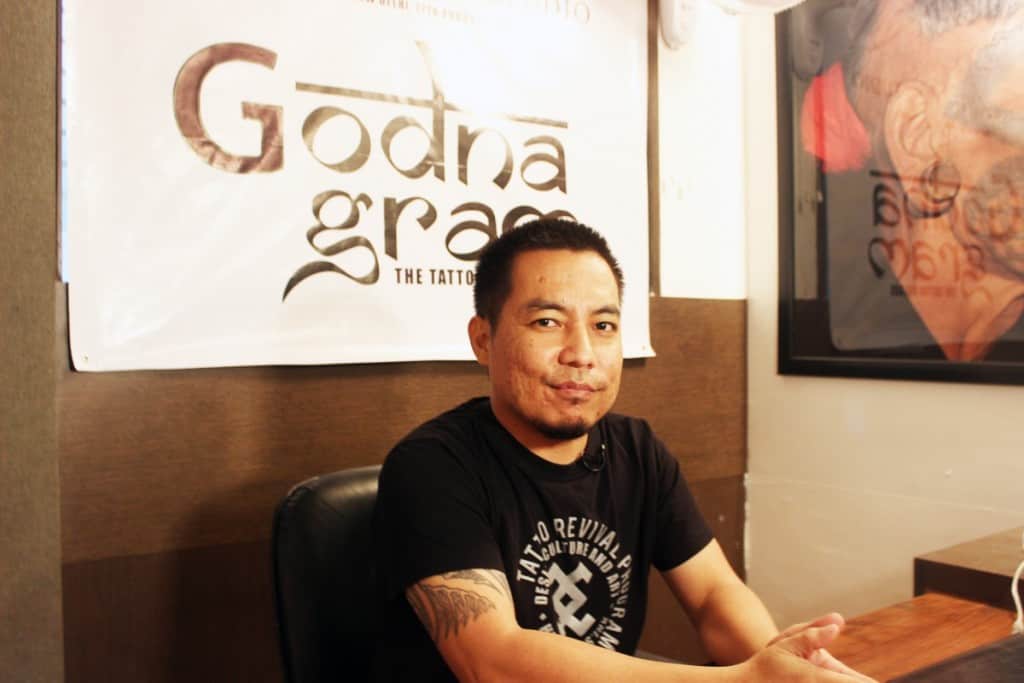 The visionary Moranngam Khaling (popularly known as Mo Naga), tattoo researcher and founder of Headhunters’ Ink, on Friday (August 12) launched his new venture called ‘Godna Gram – The Tattoo Village’ at Shahpurjat area in New Delhi. The new studio is unlike any other studios – it is perhaps the nation’s first research driven conceptual studio aimed at reviving India’s indigenous tattoo traditions. A dream mission of Mo Naga, who is extremely driven by the love and concern for the art that is so rich and deeply rooted to the culture of people, and yet “taken a backseat in the blind race of globalisation”.

It all started four years ago when Mo shifted his base from a posh studio in the Capital to a studio in Guwahati and then in Dimapur, Nagaland with a mission to promote the dying tribal tattoo of the northeastern states of India. A mission to create a ‘distinctively Indian’ brand of tattoos, and true to his vision, he travelled extensively for months as far as the remote villages bordering Myanmar interacting with communities, facing numerous challenges in connecting with the indigenous communities. What Mo found from close interaction with the village community heads baffled him endlessly as some details had never been documented or had been misinterpreted throughout in the books of history.

According to Mo Naga, Godna Gram means, “A tribe of artists preserving traditional tattoo art forms of India.” The objective of Godna Gram is to give platform and assists traditional artists from across the country to encourage and motivate them to preserve and promote the rich art, give life and credibility it truly deserves. The eventual goal, Mo Naga said, is to help young passionate artists from different tribes and communities to set up research based studios and workshops just like Headhunters’ Ink is for Naga tattoos. Mo feels that most researchers, who are few in number, are foreigners and he expressed fear that we may end up becoming pawn to some unscrupulous source that distorted the whole interpretation of the truth.

The studio wall of Godna Gram is adorned by visually attractive framed posters depicting various tattoos from different regions of India with objective to visually educate people of the diversity of Indian tattoo art. Mo Naga is not just driven but seemed to understand the psyche of people – a combination that makes for a successful entrepreneur. Mo also displayed a rare quality of understanding in choosing right students to carry his mission and vision forward. One of his earliest students, a bright and thoroughly talented young boy Monsang from Manipur whom Mo Naga took under his wings for the last two years, spoke volumes of Mo’s seriousness and dedication in imparting knowledge and education.

Mo Naga while talking to media said, “India is the country with the most diverse tattoo tradition in the world but before we realise it, this beautiful art form of our ancestors, which is so significant to our identity, is fast fading away into oblivion.”

Mo’s concern about traditional tattoos being on the brink of silent death is justified when he narrated, “Our traditional tattoos which were once marks of beauty, valour, pride and belief are now considered ugly and a mark of backwardness in the society. The tattoos which mark our identity are, more often than not, hidden away behind the veils of shame. On many occasions, people I met tried to hide their tattoos saying, ‘Mera toh godna hain bhaiyya, aapke jaisa sunder nahin hain. Aapke toh Tattoo hain.’”

Mo is keen on reinstalling “pride in their identity and culture through their own art and their indigenous way of expressions thus making Godna a flourishing art once again, to take it one step forward, and to spread awareness of its significance.”

“Someone rightly said ‘tradition is not the worship of ashes but the preservation of the fire’. So, our mantra is one step back and two steps forward” Mo added.

In some parts of the country, indigenous communities have forgotten that they were once a tattooing community, while in other places the present day youngsters would prefer to get a dragon without finding any value in their own traditional symbols. Some communities’ abandoned the practice of tattooing 50-60 years ago because of the advent of new religion or a new way of life without really understanding the importance of it.

The researcher strongly stated that tattoo has become one of the strongest medium of cultural exchange. But in this act of global exchange, Mo examined, “Are we really ready to give up our desi pride and just endorse someone else’s culture just to play the fashionable card? No! The aim is to find a balance and harmony in the exchange”.

Headhunters’ Ink in Nagaland was born out of this concern in 2012. Mo is visibly proud and rightly so as people from all over the world recognized the beauty of the art and come to Nagaland to get a traditional Naga tattoo done.

Mo plans to travel to central India in November and meet traditional artists who are still practicing to learn and invite them to the studio to practice and promote their art.

In the course of his journey, Mo Naga has achieved several accolades and appreciations. He was the only Indian to ever demonstrate tattoos in National Museum in Kolkata. He revived traditional tattooing of Konyak Naga tribe after almost 60 years. And very recently, he was featured as one of the top 100 tattoo artists of the world courtesy “The World Atlas of Tattoo”. And many other achievements in such short time, a feat that involved hard work and true passion.