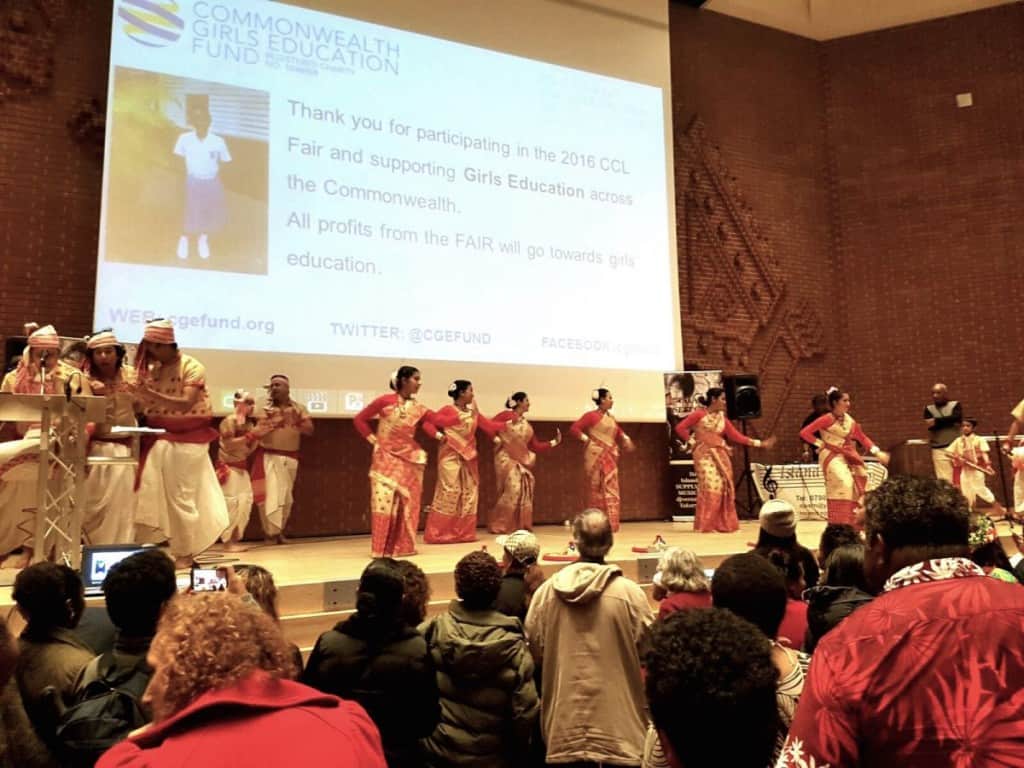 India was well represented by London’s Bordoisila Bihu Gosthi who performed the rhythmic and gracious Bihu dance from Assam. With the dancers adorning authentic attire made out of muga silk, the performance itself was eye catching as the entire sound for the well choreographed dance was created live on stage. As the performance progressed, the audience from the various Commonwealth countries clapped to the beat of the dhol and was in awe seeing the richness of this cultural representation.

As one of the official from the Indian High Commission, London mentioned, “This is the first time Bihu performance has happened in this fair and we are so grateful to all of you that you have come and performed live music. It was a beautiful performance and everybody enjoyed it … and it was very nice to see small children performing as well.”

The colourful traditional costumes were the centre of attraction apart from the graceful dance movements of the nasonis and many from the audience were seen to have spoken to the performers enquiring about the gorgeous muga mekhala chadars that they had adorned. The post performance applauds and the number of people who came up to appreciate, compliment and have pictures/selfies of them taken with the team went on to say that the team did manage to put Assam in the hearts of people from 33 Commonwealth countries.

Artefacts made by local artisans were put on display and country-specific cuisine was also available for the foodies. All profits from the fair will be utilized for the Commonwealth girl’s education fund.

‘Bordoisila Bihu Gosthi’ was formed two years back by a few professionals based out of London with the prime objective of promoting the rich Assamese culture and heritage amongst the local British crowd and the rest of the world. In 2015, their innovative concept ‘Axomor Husori British-r Suburit’ was applauded by many and they partnered with the Assamese Society of Bangalore and New Delhi to promote this concept and implement it in various suburi-s of London, Bangalore and New Delhi. Since then, the team has been performing Bihu and other forms of Assamese folk dance / music in various prestigious forums in London.

More than 600 participate in BYST’s entrepreneurship meet at Nalbari