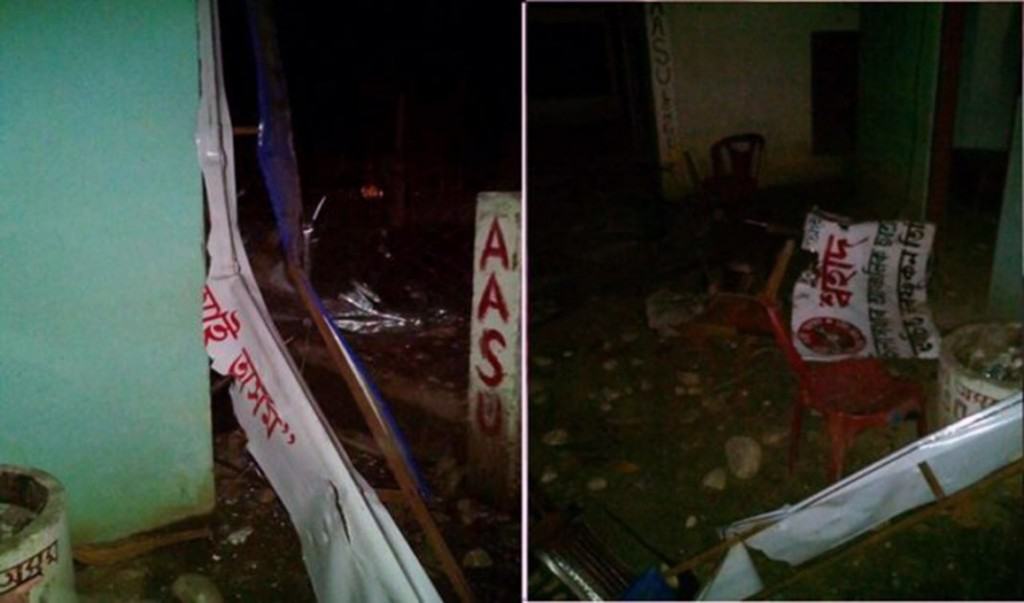 Tension prevailed in Assam’s Silapathar town on Tuesday after members of a linguistic minority organisation attacked and vandalised the office of the All Assam Students’ Union (AASU) on Monday. Clashes broke out after the AASU office was attacked allegedly by a little-known Bengali Hindu refugee group called Nikhil Bharat Bangali Udbastu Samanvay Samiti.

Dhemaji district administration on Monday imposed night curfew and the Army carried out a flag march in and around the town on Tuesday ‘to instill confidence among people’.

A rally by Nikhil Bharat Bangali Udbastu Samanvay Samiti (NBBUSS) turned violent and hundreds of its members raised slogans against Assamese people and the Assam Accord before attacking the AASU office in Silapathar.

The rally was organised after some NBBUSS leaders reportedly delivered inciting speeches in a meeting earlier on Monday.

The NBBUSS members also vandalised some shops and attacked passersby in the rally. They also clashed with the police who tried to quell the violence.

“The situation in Silapathar is under control now and the police have arrested nine people so far for their alleged role in the violence,” Assam parliamentary affairs minister Chandr Mohan Patowary told the legislative assembly on behalf of chief minister Sarbananda Sonowal.

“Additional chief secretary VB Pyrelal has been asked to conduct a probe into the matter and submit a report within 30 days,” he said.

Patowary said the government was analysing the speech of NBBUSS president Subodh Biswas and some other leaders and action would be taken against them if the speeches were found to be inciting in nature.

The AASU in an FIR had named five persons for their role in the violence. AASU members took out a torch light procession in Guwahati on Tuesday protesting against the attack at the AASU office in Silapathar of Dhemaji district of Assam.

“The security forces are on alert to ensure that the incident does not take a communal colour. We have deployed adequate forces to contain the situation and an all-party delegation led by deputy speaker of Assam Assembly Dilip Paul will visit Silapathar to assess the situation,” Patowary said.

Yo! China pep up Holi with varied colours of lip-smacking flavours