Spirit of Assam Accord will not be diluted at any cost: Rajnath Singh 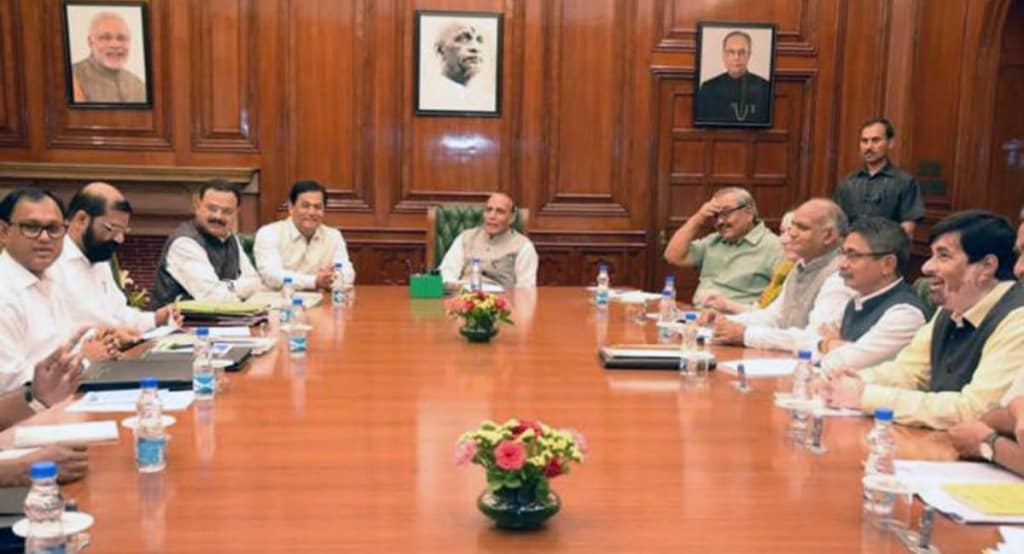 The Union minister, while taking part in the discussion, assured the AASU representatives that the spirit of Assam Accord would not be allowed to get diluted at any cost. Singh stated that the Indian government and the Assam government are committed to a flawless NRC updation exercise in Assam and to provide constitutional and economic safeguards to the indigenous people.

Singh further informed that a committee with representatives from the three parties will be formed to ensure time bound implementation of all clauses of the accord. “All issues raised by AASU will be discussed in detail and implemented in a time-bound manner. We are also mulling the option for second line of defense along the border for strengthening border security and checking infiltration. Besides, erection of fencing along Indo-Bangla border has already begun,” Singh said.

The Union home minister also stated that construction work of Bogibeel Bridge would be completed within December, 2017.

Terming the talks as meaningful, Assam chief minister Sarbananda Sonowal said, “We have started a meaningful and good beginning to the implementation of Assam Accord. Today’s talks have ended on a positive note, as we have discussed in detail clause-wise time bound implementation of the accord for providing constitutional and economic safeguards to the people of Assam.”

The chief minister further informed that in the coming days political and official level engagements will continue for implementation of all clauses of the accord within a stipulated time frame.

AASU adviser Samujjal Bhattacharyya, while terming the outcome as positive, thanked Rajnath Singh and Sarbananda Sonowal for their initiatives to hold the talks after a long hiatus. Bhattacharyya said that all 60 proposals placed by AASU for clause-wise implementation of the accord were discussed threadbare in the talks.

The AASU adviser also said that they have raised the issue of raising of a Special Task Force at district and state levels for detection of illegal immigrants. A bilateral agreement between the Indian and Bangladesh governments for deportation of the illegal immigrants was also suggested by AASU in the discussions, Bhattacharyya said.

He also disclosed that the next tripartite talks would be held after two months to speed up the momentum of the whole process.