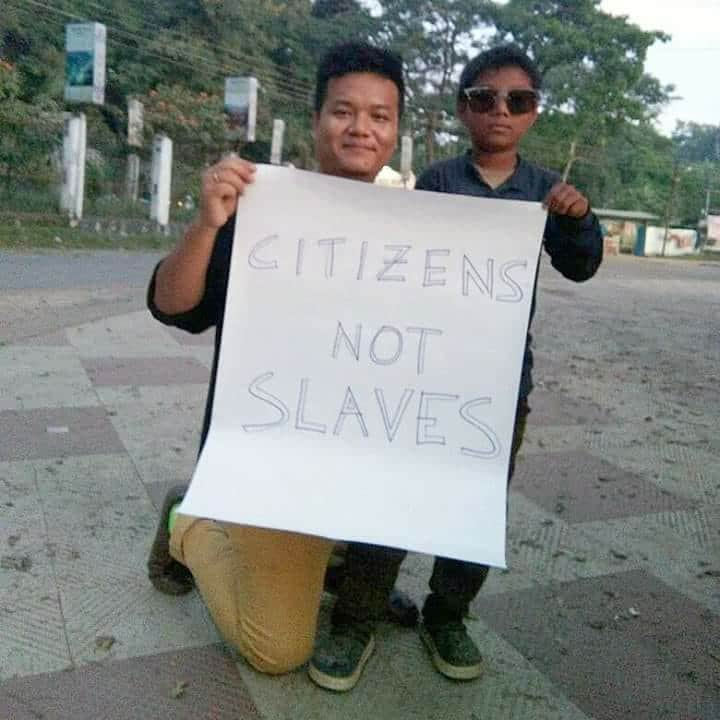 Daniel Langthasa with a poster.

Daniel, who has performed in New Delhi, said that the government officials have not been paid salaries for the last 12 months leading to pathetic conditions of the employees.

“Even after that people used to take it for granted. Here people have become used to everything. For them for not getting salary for more than a year was normal. I thought this is an issue, all of us should ask questions. Now, a good number of people especially the youngsters have joined me in the campaign #betondeu,” Langthasa who reached his hometown Haflong after performing in India gate in New Delhi last week told The News Mill.

Langthasa sang with his guitar in hand with the lyrics urging the state government to release the due salaries at the earliest.

Earlier this year, Langthasa grabbed national headlines for his daring poster campaign against the nexus of insurgents and politicians. Following that he has also sang several parody songs criticizing the actions of the state and central government including cow vigilante, religious fundamentalism and other issues.

The NCHAC, one of the oldest councils in the country established on April 29 in 1952 has more than 2,500 employees at present. They have not got their salaries for the last. The employees have staged series of protests but in vain.

Many have started to rear pigs and chickens besides agriculture activities to run their families. “It’s very humiliating when our kids ask for school fees in the school. Many of our colleagues had stopped sending their children to school,” an employee had said a few weeks back while staging protest on the road.

Langthasa has performed in the train while coming back from New Delhi and also in Guwahati. “It has gradually reached to more number of people via social media. Nothing was planned and I just kept on doing the things as it would come. The idea was not to stop but keep doing. It’s great that many youngsters have joined and some of them are willing to take part. The discussion has started now and I’m hopeful for a change,” added Langthasa.

He also started a campaign in Facebook with a profile design which has also responded well by the people.