Me-Dum-Me-Phi, one of the most important festivals of Assam, was celebrated on Wednesday. The cultural department of the state government organized International Mae-Dam-Mae-Phi Programme for the second consecutive year.

The festival mostly celebrated by the Ahom and during the occasion, they pray for their ancestors with a day-long programme.

Speaking on the occasion, the chief minister said the Ahom dynasty which ruled the state for 600 years had tremendously unified all communities and tribes of the state that brought about a period of progress and development.

Chaolung Siu-Ka-Pha, the first Ahom king, was a visionary and a great leader who strived for equal development of all sections of the people and young generation must follow his ideals so that rapid development of the state can be achieved, he stated.

Urging the young generation to empower themselves with the knowledge to be able to contribute meaningfully to the society, Sonowal said that the state government is working dedicatedly towards ensuring good governance at all levels and equal development of all sections of the society. 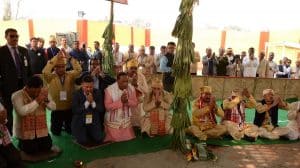 Until and unless, people imbibe the values shown by Siu-Ka-Pha to strengthen the age-old harmony and unity of the Assamese society, true respect would be shown to the great Ahom leader, he added.

Calling on the youth to harness the resources and potential of the state to the maximum so that Assam can be made one of the best states in the country, Sonowal reiterated the state government’s commitment to eradicating the problems of corruption, terrorism, pollution and illegal migration in the state. Unity in diversity is the main characteristic of Assamese society and it must be maintained at all costs, he said.

Saying that parents and teachers must take the responsibility to create good and able citizens for the society who would take the state on the path of development, the chief minister said that not words but only deeds would decide the future and youth must work with honesty and dedication to achieve excellence in all fields. He also assured of looking into the demand of the Ahom community to erect a statue of Chaolung Siu-Ka-Pha at Assam Legislative Assembly premises.