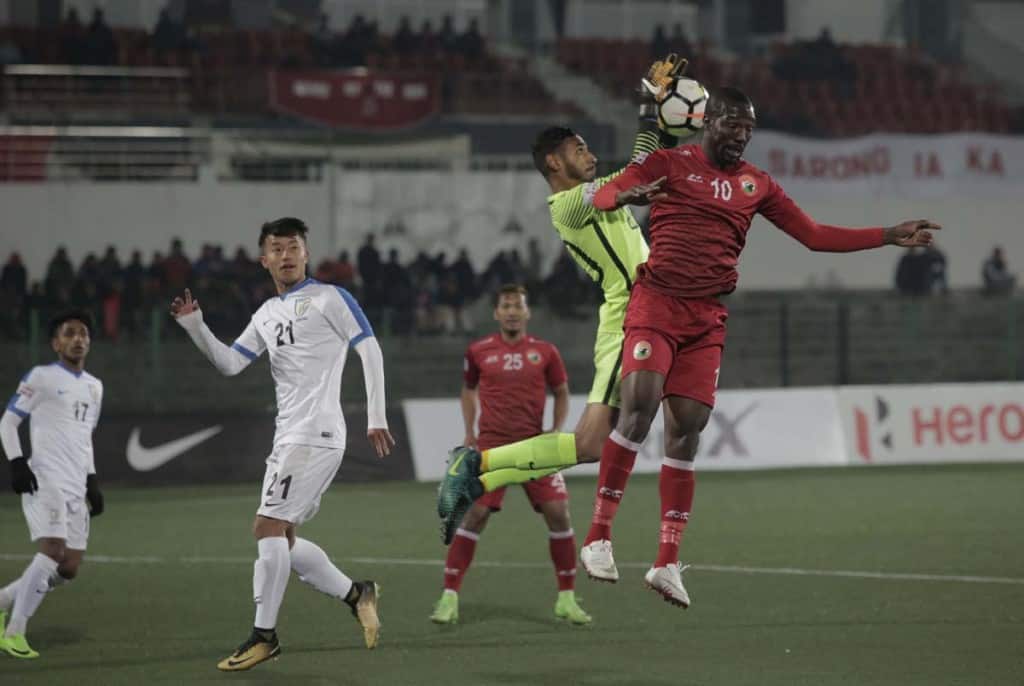 Shillong Lajong FC registered their first win of the year as they went on to defeat the AIFF developmental side Indian Arrows 1-0 and moved up a place in the points table with 14 points from 9 matches, at the JN Stadium in Shillong on Monday.

The Reds made two changes in their starting line up as captain Samuel Lalmuanpuia came in replacing Redeem Tlang and Kynsailang Khongsit was brought in to fill the void of injured Laurence Doe. From the very first kick of the game, the home side looked quite positive with the ball, playing with an attacking intent. It was as early as the 4th minute when Lajong were awarded a free-kick which yielded no positive result.

The introduction of Kynsai down the right flank proved lethal for the home side as the defender was leaving no chance to make an overlapping run and it was his run which gave Lajong the first real chance up front. Captain Samuel too was making his presence felt as he was dominating the midfield and was creating chances after chances for the forwards.

It was in the 35th-minute mark when Lajong had their best chance to open the scoring when Arrows defender Deepak Tangri fell prey to Aiman’s trickery and handled the ball inside the box and the hosts were awarded a penalty. Captain Samuel stepped up to take the spot kick but his effort was saved by the Arrows keeper. The Arrows keeper was soon called into action again as Koffi headed one from an Aiman delivery but the keeper denied the striker.

ALSO READ:  Guyana rounds with win over Barbados in CPL

As the home side went on an attacking spree, the Arrows players started to commit reckless challenges and soon midfielder Rahul Kannooly received a yellow card for his two quick fouls on defender Rakesh Pradhan. The first half thus ended goalless with Lajong being the dominant side throughout the half.

The second half saw same attacking intent from the Reds straight from the kickoff. Lajong were able to put the Arrows defenders in trouble as the hosts were finding spaces all over the final third and dictating the game play. Captain Samuel Lalmuanpuia came close to scoring in the 55th minute as his freekick beat the keeper and kissed the bar before going out.

The Indian Arrows side then started to look for an opening but they didn’t manage to register a single shot on target in the whole game courtesy of some brilliant display of defensive skills by the young Lajong academy products at the back lead by young Kenstar Kharsong.

Shillong Lajong FC soon started to get back their groove looking for an opening to break the shackle. At the 80th minute, Ivory Coast international Abdoulaye Koffi found the ball at his feet inside the box and he went on with an exquisite volley to go past the Arrows keeper and open the scoring for Lajong and made it 1-0 for the home side.

The Arrows defence looked shaky after the goal and moments later it was Samuel again who hit the post from a freekick and failed to open his tally and double the lead for his side. The home side kept looking for a goal to make their lead a comfortable one but the Arrows defence stood strong till the last kick to keep it 1-0 for the Reds.

Shillong Lajong FC will now host Minerva Punjab FC at the JN Stadium, Shillong for their 10th game of the season. The match is scheduled for Sunday, January 14 with the kick off at 2 PM.

The Hero of the Match in today’s game was Lajong forward Abdoulaye Koffi.

Green and Maroons down Aizawl FC by 2-0