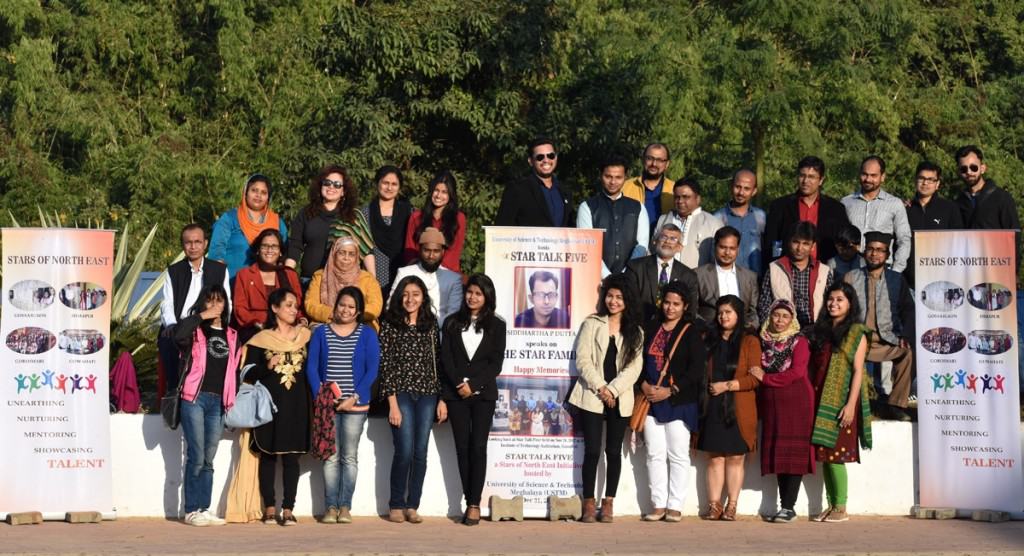 ‘Star Talk Five’ and year-end review meeting of the Stars of North East (SoNE) was held on Sunday at the University of Science & Technology Meghalaya (USTM).

The event hosted by USTM saw the presence of a large number of young professionals from different fields of the society.

Welcoming the members of SoNE and their guests to USTM, academic director at USTM, Ajmal H Barbhuiya, mentioned about the history and growth of the ERD Foundation which runs USTM and a number of other front-ranking educational institutions in the Northeast.

Barbhuiya mentioned that the North-East Graduate Congress (NEGC), which is a flagship annual event of USTM, will be held this year during February 16-18 where former president Pranab Mukherjee could be a participant. Over 10,000 college students from the eight NE states are scheduled to participate in the event.

‘Star Talk’, a series of lectures introduced by SoNE in August 2017 and held once every month, has of late become popular. Young professionals speak on a variety of subjects of social relevance during these talks.

On Sunday, communication teacher and trainer, Siddhrtha Pratim Dutta spoke on the need for good communication for success in today’s competitive world. He urged youngsters not to compete with others but with themselves. To be successful in life, we have to improve every day, said Dutta.

Star Talk Five was followed by a presentation that covered many of the major projects undertaken by SoNE during the preceding three years. The notable projects include programmes for nurturing and showcasing of talents in the society, conducting career guidance and skills training among youngsters, helping the differently-abled sections of the society, and organising motivational sessions for the students of remote and interior areas of the Northeast.

Star member Tinat Atifa Masood spoke about ‘Peace Walk’ on December 31 morning and requested SoNE to help make it an annual affair. Aman Wadud thanked SoNE for sponsoring the Annual Rural Inter School Debate at Goroimari in Kamrup (Rural) district every year. He informed that the 5th annual debate will be held this year on January 27. Rezwan Hussain presented a proposal for holding a career guidance programme at Gossaigaon in BTAD during the coming weeks.