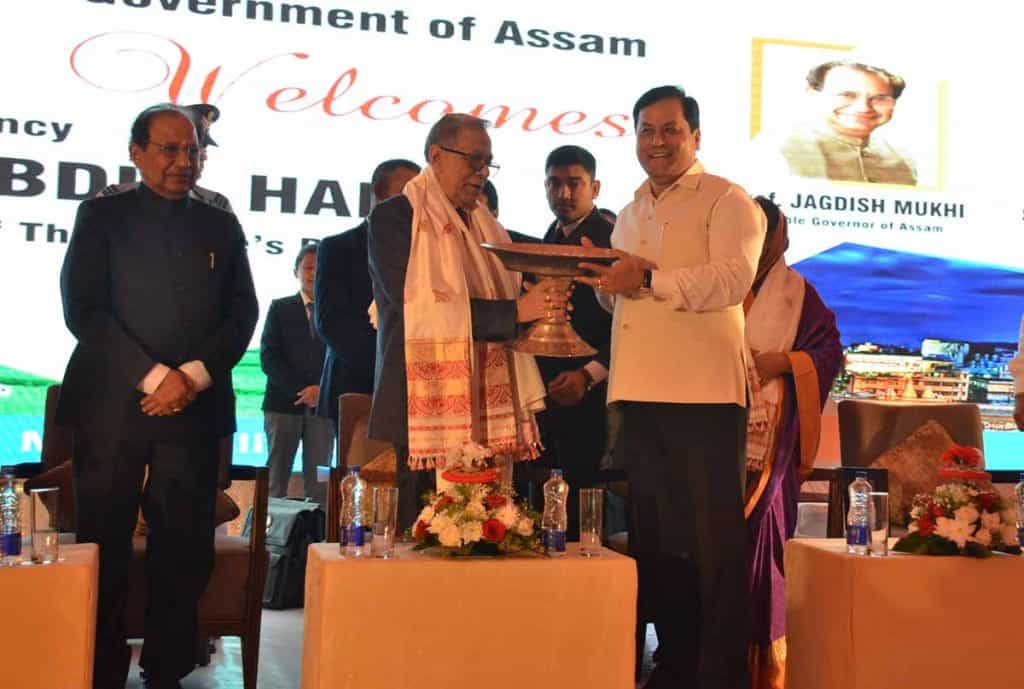 “Bangladesh attaches great importance with India as its most trusted neighbour. Both the countries share common social and cultural values and these need to be further encouraged with sustained interaction. This will facilitate sustainable peace and progress in the region.” President of Bangladesh Md Abdul Hamid said this while speaking at the dinner hosted in his honour by the Assam government in Guwahati on Thursday.

Acknowledging the cooperation and help extended by the Indian government and the people of the country to the Muktijudha of Bangladesh War of Liberation, the President specifically recalled his days in Assam and Meghalaya during those tumultuous times. He also referred to the shelter offered to around one million people who took refuse in the 45 camps set up in the erstwhile Assam.

Lauding the present state government in initiating various development projects, President Hamid stressed that the connectivity projects undertaken by both the governments of India and Bangladesh for progress and prosperity of both the nations. He opined that these initiatives would be the cornerstones of the vibrant relation between these two great neighbouring countries.

Assam governor Jagdish Mukhi also spoke on the occasion and highlighted the inherent bond between Assam and Bangladesh. He also emphasised on furthering people to people contact by engaging students as ambassadors of goodwill between both the countries.

“The relationship of Assam with Bangladesh is of great importance and priority for our government. The bond that the people of Assam share with Bangladesh is very unique. It is a special relationship rooted in common culture, heritage, literature and language.” chief minister Sarbananda Sonowal said while highlighting the historic ties between Bangladesh and Assam in particular and the region in general.

Saying that a of mutual trust and confidence; respect for each other’s sensitivities and concerns; and, peace and stability in the relationship between Bangladesh and Assam are essential ingredients for realizing the immense potential of the entire region, the chief minister appreciated the cooperation extended by the Bangladesh government to Indian government in marginalizing the insurgency activities in the northeast.

Highlighting the need to harness the untapped potential in the area of trade and investment, connectivity, border and security, people to people exchanges between Assam and Bangladesh, Sonowal mentioned about number of projects undertaken by both the governments for bringing a paradigm shift in the growth trajectory of the region.