Alifa – A grim fairytale showing the mirror of today’s Guwahati 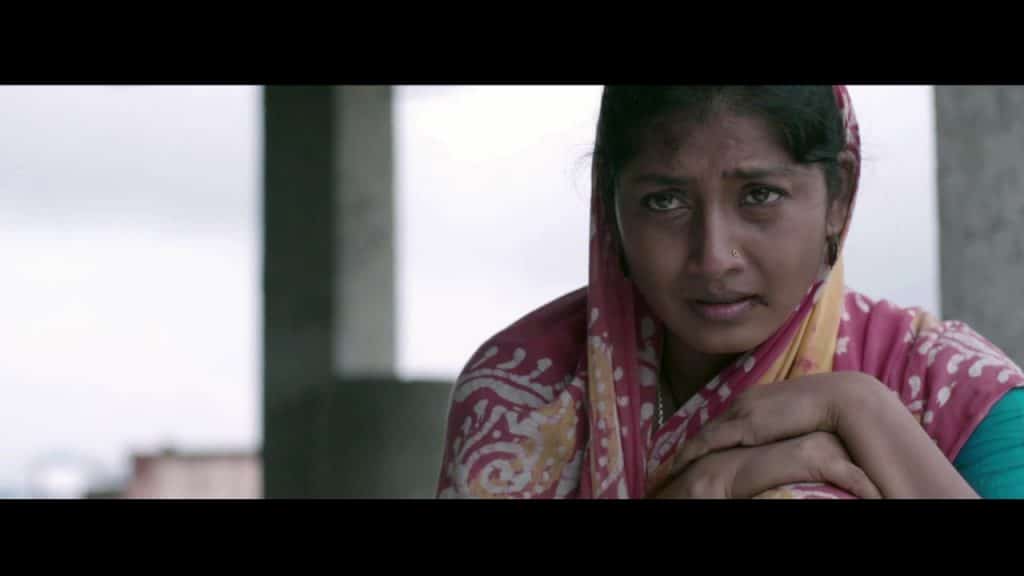 A still from the movie Alifa

Every day while passing through the heart of Guwahati, we see a group of nameless folks huddled in a corner of the road. They are daily wage labourers who wait for someone to hire them for the day from the roadside ‘labour bazaar’ so that they can put food on the table for their children at night. Deep Choudhury’s directorial debut Alifa’s greatest achievement is that it puts focus back on the plight of these people.

Alifa tells the story of a working class family comprising of Ali (Baharul Islam), his wife Fatima (Jaya Seal) and their two kids, Alifa (Pakija Hasmi) and Faisal (Rayan Abdul). The family migrates to Narakasur hills after losing their land in Barpeta to the wrath of Beki river. Ali soon loses his job at a construction site. The family has to depend on Fatima’s income now as Ali tries to find work as daily wager in the city.

Young Alifa who dreams of studying in a school however has to do the household chores and also look after her kid brother Faisal. The hopeless existence of the family gets further complicated when Fatima gets involved in an extra-marital affair with fellow co-worker Requib and a man-eater leopard starts terrorising people in the vicinity.

Choudhury, who won the National Award for Best Debutant, marvels with his assured direction. First of all, he should be lauded for taking up a very unconventional topic as the theme of his maiden movie. The movie will get full marks for realism. Detailing in the movie is excellent and the production team has taken utmost care to ensure that nothing in the movie seems out of place. Because of this, the audience feels like they are let inside the decrepit house of this impoverished family. The characters have been built with great care. They are people of flesh and blood. They have fallacies. They stray from the societal norm of morality and find solace in an extra-marital affair. They tolerate the humiliation from the upper class people and the impotent rage explodes in the wrong place and the wrong time. But the audience also feels for these people who have encroached upon forest land.

Despite ample opportunity to make sweeping political statements, Choudhury is wise to let sleeping dogs lie. He shows how the jungles and hills around Guwahati has been encroached which gives rise to man-leopard conflicts. He also shows how corrupt forest officials instead of solving the problem keep it alive by coercing the poor settlers to pay regular bribe. He also raises the issue of importance of education and it is deeply painful to see Alifa’s desperate yearning to go to school. Issues like urban migration, displacement, apathy of the more privileged class towards the Muslims from East Bengal origin are also addressed by the filmmaker. However, rather than offering any solution to these problems, he chooses to show us the mirror.

The terror of leopard is represented symbolically in the movie. Rather than showing the beast, the filmmaker makes us feel its presence through conversations and news footage. However, the tension is built so masterfully that the audience almost expect a feline attack anytime after the intermission.

The movie is brought to life by excellent performance from the entire cast. Seasoned theatre actor Baharul Islam perhaps gives his career-best performance as Ali. He gets invested in the character fully and his acting is one of the high point of the movie. Jaya Seal, a renowned actress from Kolkata, is also a revelation as she picks up the nuances and accent of a rural woman perfectly. Seal has played a rural character in the past in Buddhadev Dasgupta’s award winning movie Uttara, and in my opinion, she surpasses that performance in this movie.

Pakija Hasmi is marvellous in the titular character of Alifa and Rayan Abdul gives good support as her kid brother Faisal. Satya Ranjan as Ali’s friend Saifuddin, Prasun Gayen as Fatima’s lover Requib and Pabitra Rabha as the corrupt forest official also leave an impression with some terrific acting. Veteran actor Victor Banerjee in his two-minute cameo asks some of the most pertinent questions which have no answer.

Nahid Ahmed’s camera beautifully captures both the greenery of the hills and the desolateness of the city. Editor Rabiranjan Maitra does well to keep the audience invested in the narrative with deft scissor work. Ace musician Bickram Ghosh, also the husband of lead actress Jaya Seal, adds to the experience with some brilliant music.

Alifa is undoubtedly one of the best movies to come out from the state in recent times. It is intelligent cinema which doesn’t sugar-coat reality but at the same time doesn’t bore the audience by offering philosophical discourse. The strength of the movie is that acknowledges the intelligence of the audience and allows them to make their own conclusion from the narrative.

At the time when issues like illegal migration, displacement due to flood and erosion, man-animal conflict has become some of the most pressing topics in the state; Alifa comes as a whiff of fresh air with its deft handling of all these subjects. These are not easy topics to discuss and full credit to Choudhury for pulling this off.

Alifa dreams of fairytales but ultimately her life turns out to be a grim fairytale. This is a movie which was needed to shake us up from our comfortable lives and show us the other side of the spectrum.

I’m competing with myself, says Hima Das after qualifying for CWG semis