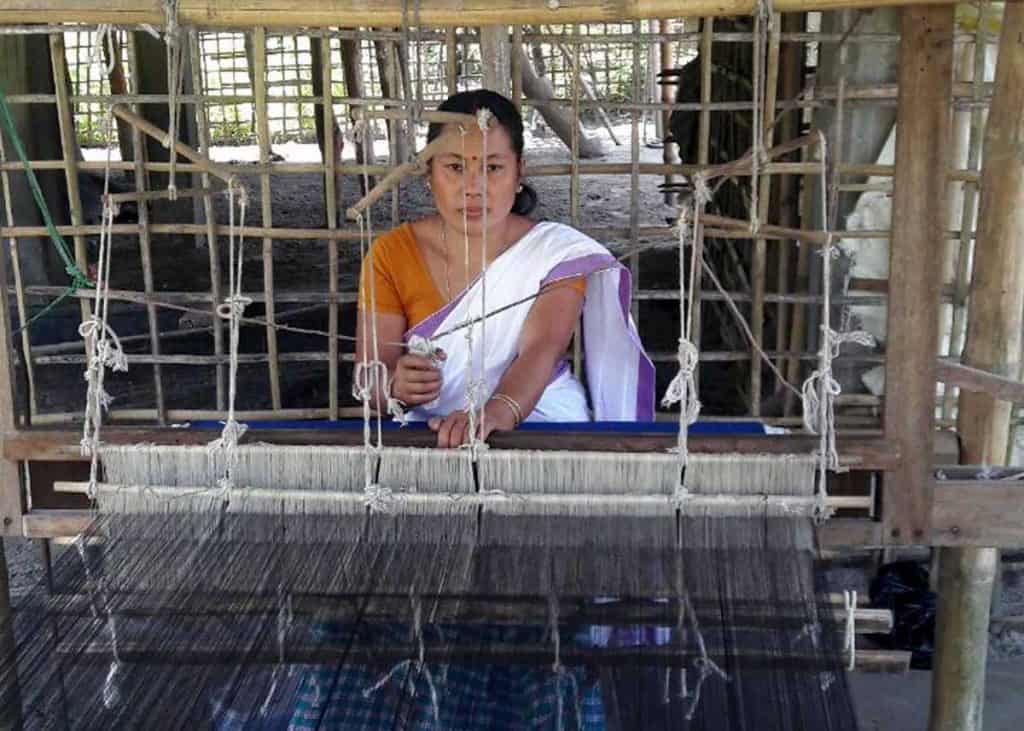 Jyotiprava Lagachu, from a remote Matmora village in Assam’s Lakhimpur district, almost gave up weaving which was a source of livelihood for her family.

She was fed up, because, the earning was less, and top of that, the annual flood would destroy everything in her locality.

For Jyotiprava, the scenario changed drastically once she underwent a skill upgradation programme in their neighbourhood.

“Life was pretty difficult with the less earning. In spite of the entire day devoting to weaving, I could hardly earn around Rs 2,500 a month. My husband also had to go out for work to increase the family earning,” said 28-year old Lagachu.

Most of the villagers are devastated by the floods. Many in the neighbourhood have shifted to other places and the rest struggled to live. The agri-based villagers, with no option for livelihood, started migrating to other parts to work as daily wage earner and the womenfolk of the sand deposited area endeavoured for livelihood in the traditional loom sets under their tilted house.

Moreover, exploitation of middleman was another problem which was making their lives miserable.

Lagachu was one of the lucky individuals to be a part of a skill upgrade programme in 2015 by Centre for Microfinance and Livelihood-Tata Trusts and Mising Autonomous Council in Matmora.

Around 150 village women from three clusters in that locality were trained on the usage of fly shuttle loom and also quality production, promotion and marketing.

“I was fighting to fulfil the basic needs of my family. So, I was very keen to learn about the new handloom technologies and was very eager to be a part of the project. After the training, I realized it was a great thing to happen,” Lagachu said.

Shifting from throw shuttle to fly shuttle loom enabled her to produce quality items but her production capacity also increased by three times. With the production of silk items, at present she is earning from Rs 12,000 to 18,000 a month.

Her husband Kishore Lagachu who once migrated in search of work has now returned home and is helping her in the weaving activity. Her children are getting education in a private school.

Chatra Medok, the programme manager said that they are also focusing on new designs and marketing aspects.