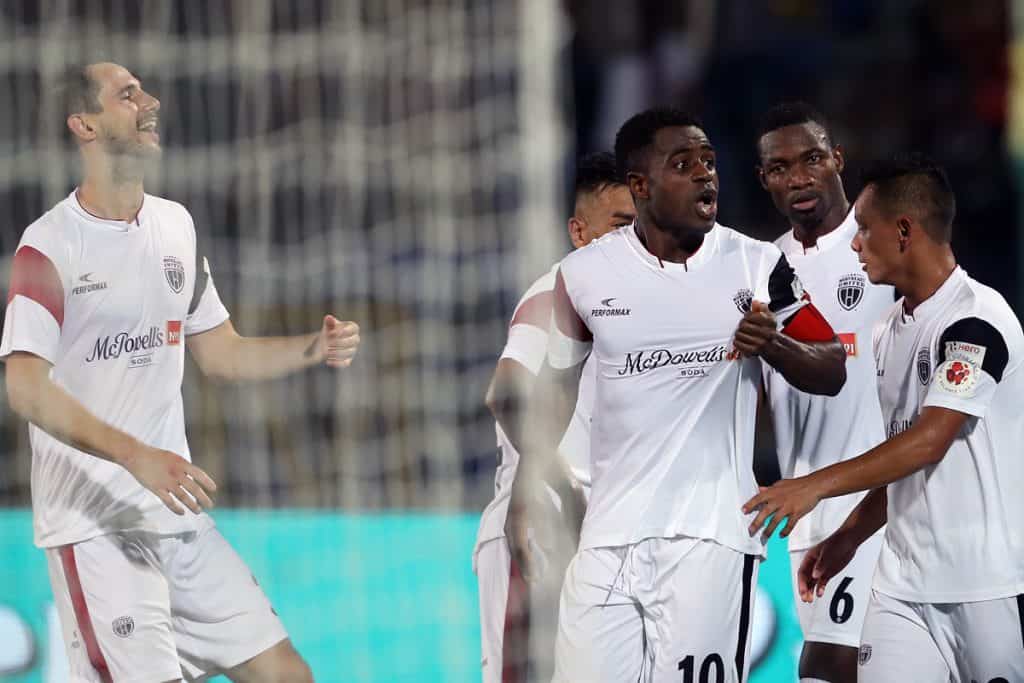 A new-look NorthEast United FC started their Indian Super League Season 5 campaign with a 2-2 draw against FC Goa at the Indira Gandhi Athletic Stadium in Guwahati on Monday, in front of a strong 18,000 group of fans.

The open-ended contest saw chances galore for either side.

Ferran Corominas (14’, 38’) bagged both goals for the visitors while Federico Gallego (8’) and birthday boy Bartholomew Ogbeche (53’) were the scorers for the hosts.

After a stop-start first few minutes, the hosts were gifted a goal after a terrible error from 18-year-old Mohammad Nawaz. The Goa custodian charged out of his box and handled the ball in the belief that Bartholomew Ogbeche was offside. However, no such whistle was blown by the referee who instead awarded a free-kick to NorthEast United for a handball. With Nawaz yards outside the box, Federico Gallego showed some quick thinking to chip the ball into the empty net, much to the horror of Nawaz.

Having profited from Nawaz’s error to take the lead, the hosts relinquished it minutes later after an error by their own goalkeeper, TP Rehenesh. The NorthEast United custodian failed to collect a floated cross from Jackichand Singh and Spanish sharpshooter Ferran Corominas was on hand to bundle the ball into the net.

The visitors gained a foothold in the match after the equalizer and came close to taking the lead twice through Jackichand but the winger’s first attempt was deflected away for a corner, while the second just bounced over the bar.

Goa had their deserved lead in the 39th minute with Corominas bagging his second of the night. A midfield scramble saw Hugo Bomous release the Spaniard in the box and the prolific striker did well to evade two tackles with body feints before beating Rehenesh at his near post with a perfectly placed shot.

In the second half, the Highlanders did not have to wait too long to get their second goal with Ogbeche getting off the mark with a thumping header. The NorthEast United forward’s header after a perfect cross from Keegan Pereira gave Nawaz no chance as more than 18,000 home fans roared in delight.

The hosts had two gilt-edged chances to take the lead around the 65th minute when Nikhil Kadam beat his man to come one-on-one with the Goa custodian. The winger attempted to curl the ball into the right-hand corner of the goal but Nawaz pulled off an excellent dive to deny him. From the resulting corner, Grgic had the goal at his mercy but the central defender directed his header wide.

Minutes later, Boumous made a darting run into the hosts’ box after being released by Carlos Pena. The Goa midfielder had done well to beat his markers and was poised to take a shot with only Rehenesh to beat but a last-ditch tackle by Leudo averted the danger.

The end-to-end action continued till the final whistle with the teams sharing the spoils.

GIFF will bridge the gap between countries: Gauhati University students