Dancers from US, Italy, Russia; Syrian curator to be a part of 10th Pragjyoti International Dance Festival 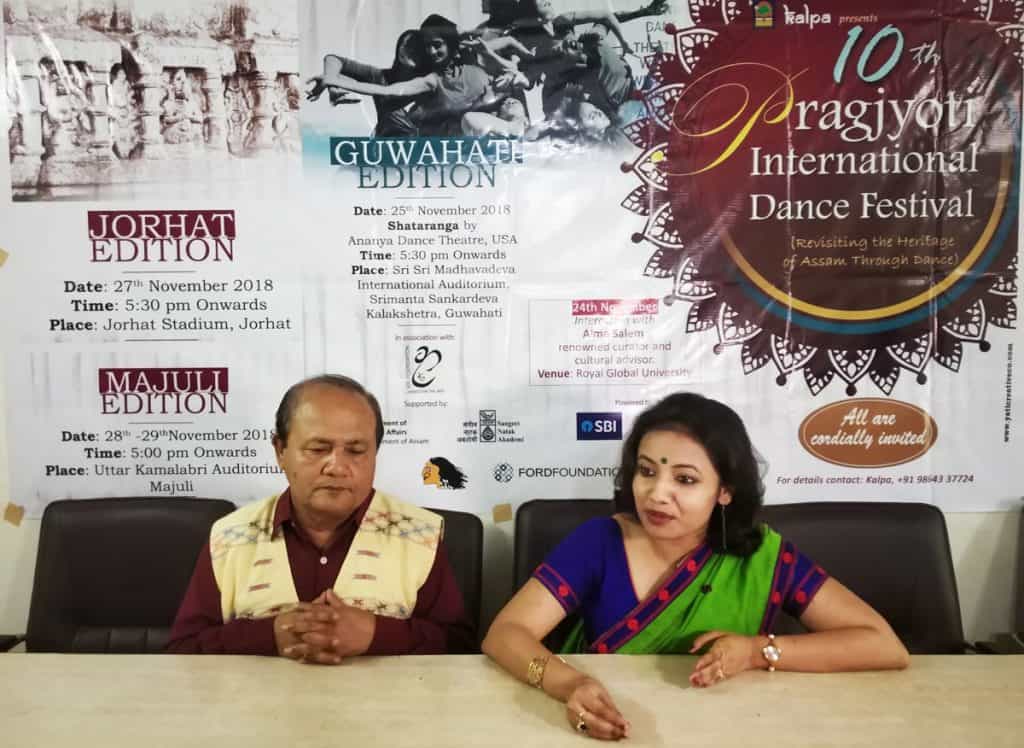 The 10th edition of the Pragjyoti International Dance Festival (PIDF) at Guwahati, Jorhat and Majuli, will showcase dancers from US with participation of reputed Syrian curator and cultural expert Alma Salem.

Kalpa, a society for promotion of literature, art, culture and social harmony, announced the 10th edition of Pragjyoti International Dance Festival (PIDF) on November 23. During a press conference at Guwahati Press Club, national award winning Sattriya danseuse and festival director Anwesa Mahanta said that the decade-long journey of the festival will be celebrated in three major cultural landmarks of Assam – Guwahati, Jorhat and Majuli.

“Each and every year we try to reach out to people with various dimensions and perspectives of dance. Dance is a holistic art form encompassing range of expressions. The festival is curated in such a way where each participant both in the form of performer and audience takes back home a rich experience of the heritage of dance,” said Anwesa Mahanta.

The curtain raiser of PIDF will be held at the Madhavadeva International Auditorium of Srimanta Sankardev Kalakshetra in Guwahati from 5:30pm onwards on November 25. The curtain raiser will feature a performance by internationally acclaimed contemporary dance troupe Ananya Dance Theatre from US, who will present Shaatranga – Women Weaving Worlds, a 90-minute dance production without intermission choreographed by Ananya Chatterjea. The dance group is composed of artists of color who create performances about the lives and dreams of women around the world.

The Guwahati edition of the festival will be in collaboration with the Kri Foundation and with the support of Ford Foundation and Ananya Dance Theatre.  Another highlight of the Guwahati edition, will be the presence of reputed Syrian curator and cultural expert Alma Salem, who will interact with the students of Royal Global University on November 24, regarding the situation of Syria and how the artistes are responding artistically. She will also showcase six short dance documentaries.

Noted art scholar and founder of Kri Foundation Arshiya Sethi said, “It is a great pleasure for me to bring to my ‘karm bhoomi’ Assam, through Kri Foundation, a very significant art that upholds a critical agenda for out times. I see a global and local valence for the Pragjyoti International Dance Festival that is celebrating its tenth year this year. Kri Foundation is in its fifteenth year. Thus, this collaboration becomes reason for a double celebration.”

PIDF is an annual classical dance extravaganza conceptualized to exhibit the wide range of India’s classical dance forms together on one platform and to celebrate the rich heritage of Assam. After the curtain raiser in Guwahati, the PIDF team will travel to Jorhat, where PIDF will showcase Bharatnatyam by Lucrezia Maniscotti from Italy, and Mohiniattam by Alexandra Vodopyanova from Russia, Kuchipudi by Avijit Das, Manipuri by artistes of JNMDA, Sattriya by monks of Kamalabari Sattra, Titabor and Anjali Borbora, Jorhat Sangeet Mahavidyalaya and a dance presentation showcasing three dance styles by Bhargabi Phookan and her team at Jorhat Stadium. The Jorhat edition of the festival has been organized in association with the district administration, Jorhat and Pratah Bhraman Committee.

The grand finale of the 10th edition of Pragjyoti International Dance Festival will be held at Majuli on November 28-29, at Sri Sri Uttar Kamalabari Sattra Auditorium. The festival will witness performances by classical dancers from all around the world including internationally acclaimed and Sangeet Natak Akademi Awardee, Kathak dancer and choreographer Prerana Shrimali and eminent Kuchipudi exponent Madhuri Mazumdar along with local artists of Uttar Kamalabari Sattra, Bhogpur Sattra and also ethnic dance presentation by Mising community thus becoming a catalyst in the promotion of social harmony and peace through culture.

The festival, held in association with the Uttar Kamalabari Sattra and district administration, Majuli, with the support of Sangeet Natak Akademi where captivating performances by kaleidoscope of the nationally and internationally acclaimed artists along with the local artists of the region is bound to leave the audience of Majuli spellbound.

The festival as a whole would be supported by Oil India Limited, State Bank of India and Cultural Affairs, Govt. of Assam.

As a part of the festival, Kalpa will also organize interactive sessions, in Jorhat Convention Centre on November 27, and at Vivekananda Kendra School in Majuli on November 29, where the visiting artists will share their experiences, ideas and interpretations of their art forms with the students.

“With every passing edition, PIDF has taken up socially relevant messages and initiatives to promote our intangible cultural heritage and to provide a global platform to our local art forms. Our effort this year will be concentrated on promoting heritage awareness among our guests and hence build a base for promotion of Assam as a cultural tourism hotspot. The festival experience would not only give the performers a platform to share their art form but also give a wider space to interact and see the performances of other art traditions.  The audience will witness a range of art forms with varied styles of artistic representations,” said Anwesa Mahanta.