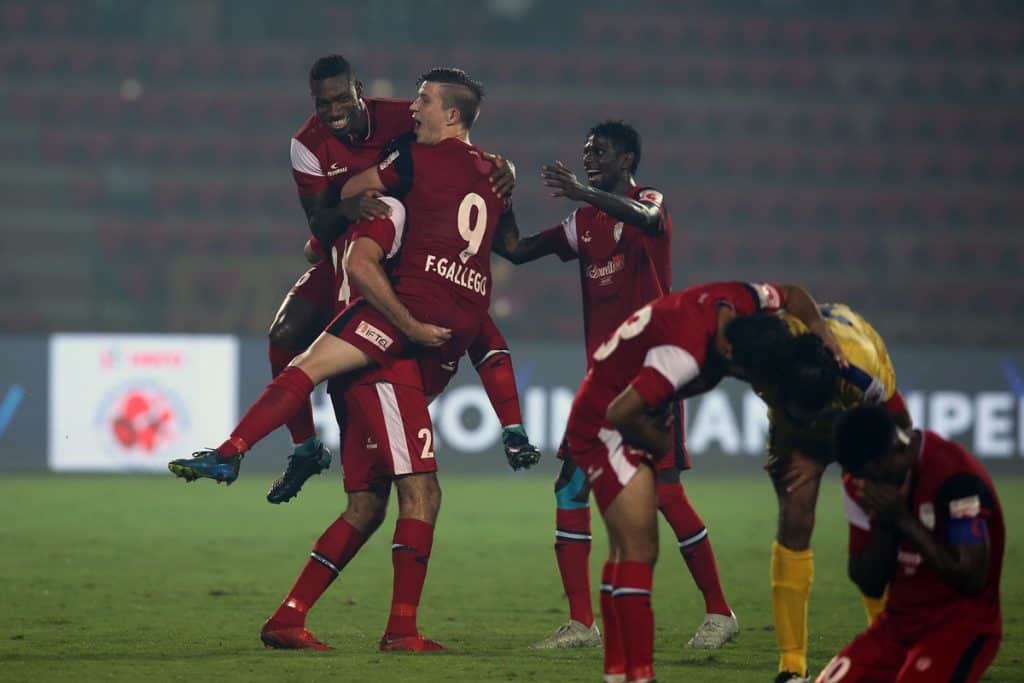 After a goalless first half, Matej Poplatnik scored in the 73rd minute to hand Kerala the lead. However, a late Bartholomew Ogbeche penalty (90+3’) and an even later winner from Juan Cruz Mascia (90+6’) sealed all three points for the Highlanders.

NorthEast United’s first win on home soil this season sees them rise to third on the table with 14 points from seven matches, while Kerala remain at the seventh spot with seven points from eight matches.

The hosts took control of the match early on and knocked on the doors of the Kerala defence. In the 10th minute, a Federico Gallego corner-kick that wasn’t properly cleared by Poplatnik at the near-post fell to Ogbeche whose free header was brilliantly saved by Dheeraj Singh in goal.

At the other end, Halicharan Narzary managed to beat his marker on the left flank and picked out an unmarked Seiminlen Doungel in the centre of the box but the Indian forward headed glaringly wide.

NorthEast United centre-back Mislav Komorski was next in line to send a free header wide, this time from Lalthathanga Khawlhring’s cross.

Kerala came close to scoring against the run of play before the break. Narzary beat Robert Lalthlamuana in the box and chipped the ball over an onrushing Pawan Kumar but the woodwork denied the Indian forward.

After the change of ends, Kerala Blasters brought on CK Vineeth at the hour-mark as David James sought a spark in the attacking third and the go-to player almost delivered a few minutes after taking the field. The forward received the ball on the edge of the box and unleashed a dipping shot that missed the target by inches.

Kerala finally broke the deadlock in the 73rd minute through Zakeer Mundampara’s corner-kick. The midfielder’s delivery to the near post was headed into the net by Poplatnik who had drifted away from his marker.

The Highlanders tried to mount a response by pouring men forward. Ogbeche won the ball in midfield and after a neat give-and-go with Nikhil Kadam at the edge of the box, tried to curl the ball into the net but Nemanja Lakic-Pesic kept Kerala in the lead with a timely block.

Just as it seemed like Kerala would get all three points, Sandesh Jhingan barged into Mascia inside the area and conceded a penalty. Ogbeche stepped up for NorthEast United FC and converted the spot-kick to level the scores.

However, there was still more drama three minutes later as a loose ball inside the box fell to Mascia who lashed a volley in to stun the visitors and claim all three points.