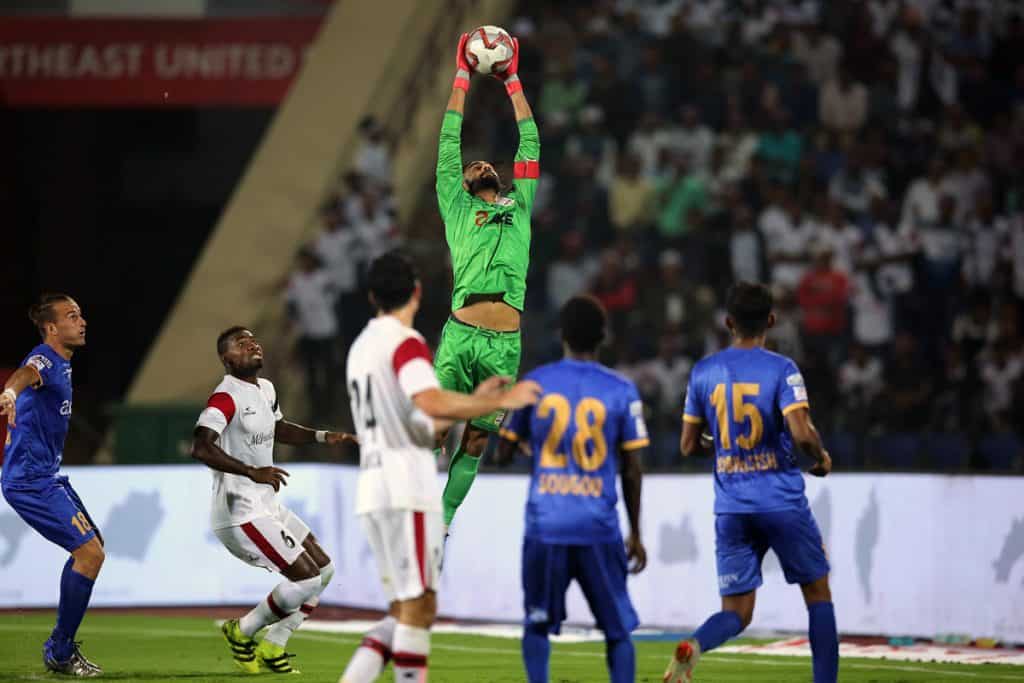 NorthEast United failed to rise to the occasion as they lost 0-1 to Mumbai City FC at the Indira Gandhi Athletic Stadium in Guwahati on Friday.

The Highlanders pressed their opposition throughout the Hero Indian Super League season 5 match on Friday but could not convert their chances into a goal.

Mumbai City FC, who were demolished 0-5 by FC Goa earlier in the league, they bounced back registering their third consecutive victory. This one was a narrow 1-0 against the unbeaten NorthEast United FC and that too at their home ground in Guwahati.

Arnold Issoko’s fourth-minute goal was the difference between the two sides as the Islanders climbed to third on the table with 13 points from seven games, the same as FC Goa and Bengaluru FC who sit above them. NorthEast United are stuck with 11 points but have a game in hand.

Mumbai surged ahead with their first attack. NorthEast didn’t clear their lines from a Paulo Machado corner and the ball once again fell for the Portuguese midfielder. His first time shot struck Arnold Issoko’s chest and crossed the line despite goalkeeper Pawan Kumar’s best efforts. The decision was controversial as repeated video replays also couldn’t confirm whether the ball actually crossed the line or not.

Having conceded a goal, the Highlanders responded to the setback by fashioning several chances. Bartholomew Ogbeche saw a header miss the far post after he got on the end of a cross from Redeem Tlang from the right before Federico Gallego had a chance to pull one back as they won a free-kick on the edge of the box. However, the Uruguayan’s free-kick sailed over the bar with Amrinder Singh hardly troubled.

Mumbai had a chance of their own when a move straight from the training ground saw Machado square the ball to Rafael Bastos from a free-kick. The Brazilian’s shot went inches wide of the far post.

Mumbai had a scare when Lalthathanga Khawlring’s corner caught Amrinder by surprise and the ball clipped the crossbar on its way out.

Three minutes after the restart, Ogbeche made a brilliant run down the left and crossed for Juan Mascia. However, the Uruguayan striker couldn’t turn it home.

Mumbai had a lot of chances to double their lead as the half wore on. In the 50th minute, Moudou Sougou had a brilliant opportunity to score when he was played onside and only had to beat the onrushing goalkeeper. The Senegalese striker saw his lobbed effort miss the target, much to the disappointment of Jorge Costa.

Sougou missed another chance just after the hour mark. Lucian Goian’s long punt found Issoko who did well to get beyond his marker and release Sougou down the left who blasted his shot over.

The tale of wasted chances continued at the other end too as Ogbeche got on the end of a cross and found space to shoot but his effort went straight into the hands of Amrinder.

A mistake from Lucian Goian then allowed Ogbeche to be in a one-on-one situation with Amrinder but the Nigerian striker slammed his effort into the goalkeeper. Off the rebound, Rowllin Borges’ shot sailed over the bar.

Despite a late onslaught, the visitors held on to their slender lead as NorthEast fell to their first defeat to the season.