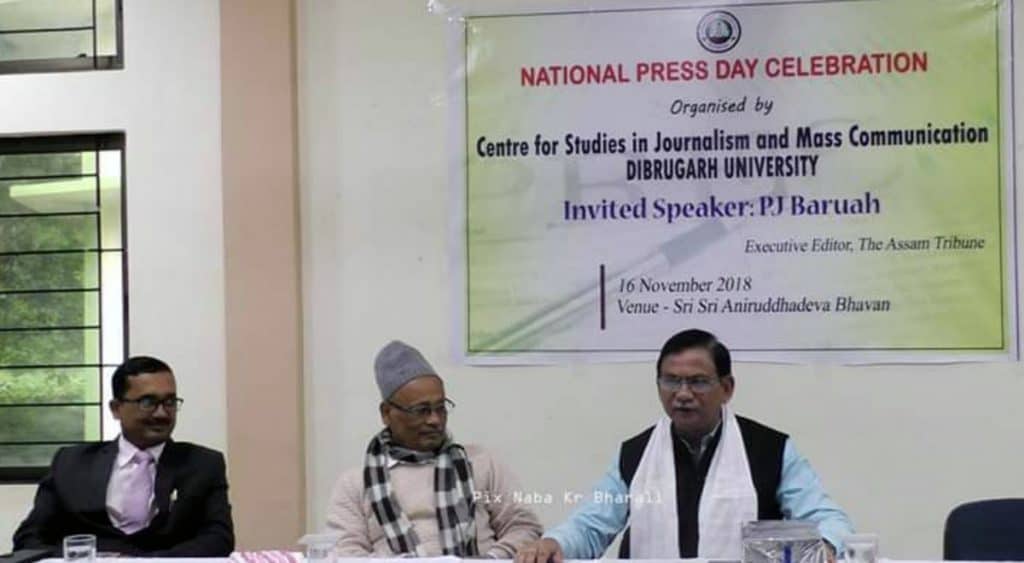 On the occasion of National Press Day on November 16, the Centre for Studies in Journalism and Mass Communication, Dibrugarh University organized an interactive session with Assam Tribune executive editor Prashanta Jyoti Baruah.

Taking part in the session, Baruah spoke on the ‘Freedom of Press in present media context’. The session was chaired by Nava Kumar Handique, Dean of Humanities, Social Science and Law, Dibrugarh University.

Baruah started his speech with the reminiscence of his days as a student in Dibrugarh University. He motivated the students by speaking about his adventurous experiences and days of self introspection.

He also spoke of how journalism is the fourth pillar of democracy, yet there is no security for journalists. “The International Federation of Journalists have stated that at least 2297 journalists have been subjected to violence since 1990,” he said, adding that a journalist is being killed every five days, but there is no trial regarding the same.

The senior journalist advised the students who were part of the National Press Day celebrations, to incorporate “good human values” and zero prejudices, which is very important especially in the field of journalism where they “work with people”.

Baruah spoke on how reading novels changed his life and brought him in the position of being called a journalist. “The journalistic traditions in our country are strong enough to face the challenges and to overcome them, and to lead people and guide the people in the path of social justice,” he said. He also spoke about the decline of print media, which has been balanced by the rise of vernacular newspapers and new media. He added that ‘when one window closes, another opens’.

The event was attended by chairperson of CSJMC Satyakam Borthakur and other faculty members of the centre as well as the university along with mass communication and journalism students of the university.

Barbeque Nation re-launches in Guwahati with a refreshing makeover