Assamese film Suspended Inspector Boro witnessed a houseful premier at Carnival Cinemas in Beltola, Guwahati on December 6 amid thundering applause. The film is releasing across theatres in Assam on December 7.

The film, by the team of super-hit Assamese films Local Kung Fu 1 and 2, is a serious action thriller starring actor Utkal Hazowary in the title role, and several popular actors from the Local Kung Fu series.

Written and directed by Kenny Basumatary, Suspended Inspector Boro, is releasing on December 7 in Assam and depending on cooperation from multiplexes outside Assam, in the metro cities on December 14th.

The film is jointly produced by Bhishan Rai, Priyama Goswami and Kenny Basumatary. “I must thank and congratulate the team. We have managed to greatly raise our production values this time.. The fight scenes are one level higher…remember we have broken a lot of stuff in this film. Hope the public enjoys the experience,” said director-actor Kenny Basumatary after the premiere. Speaking about Suspended Inspector Boro, filmmaker Bhaskar Hazarika, of Kothanodi fame, said: “I am thrilled to see Kenny’s new film getting a wide release in the state. SIB is an entertaining Assamese martial arts film but with a script that is conscious of gender and other social issues of the day. I urge people to watch the film in their nearest cinema hall.”

“We are glad to see this level of interest among the filmgoers for an Assamese film. From the audience reaction at the premier, we can easily say that Suspended Inspector Boro will be a hit. We at Carnival Cinemas, are proud to play host to your entertainment,” said Ratul Pachani, CEO and managing partner at Matrix Mall, Carnival Cinemas, Beltola.

The plot, written by Kenny Basumatary, starts with Inspector Boro already suspended for bashing up a highly connected gang. A preview of the sequence was already released on YouTube which went viral.

Inspector Boro gets a call from an SP who asks him unofficially to find a girl named Sabrina Rai who’s gone missing three days ago. She was taken from her Udalguri village to Guwahati on the pretext of job training, but now her phone’s been switched off for three days and she’s vanished. Inspector Boro heads to Guwahati and fights his way to the truth. Interestingly, Kenny is playing the main villain, Inspector Lokkhi Modon Jwala. An eclectic mix of songs have been composed for Suspended Inspector Boro – Mukto Aakax by rising star Shankuraj Konwar (sung by Eepsita Hazarika), Aaji Kiyo Janu by Utkal (a duet with Sarmistha Chakravorty), a rap track on garbage management sung by Bonny Deori and a hard rock piece by Derrick Correia and Anisha Saikia, and. The first three songs have just been released on Youtube to great response. The background music and sound design are being done by Marathi Filmfare award winners Utkarsh Dhotekar and Ranjan Pattnayak respectively. 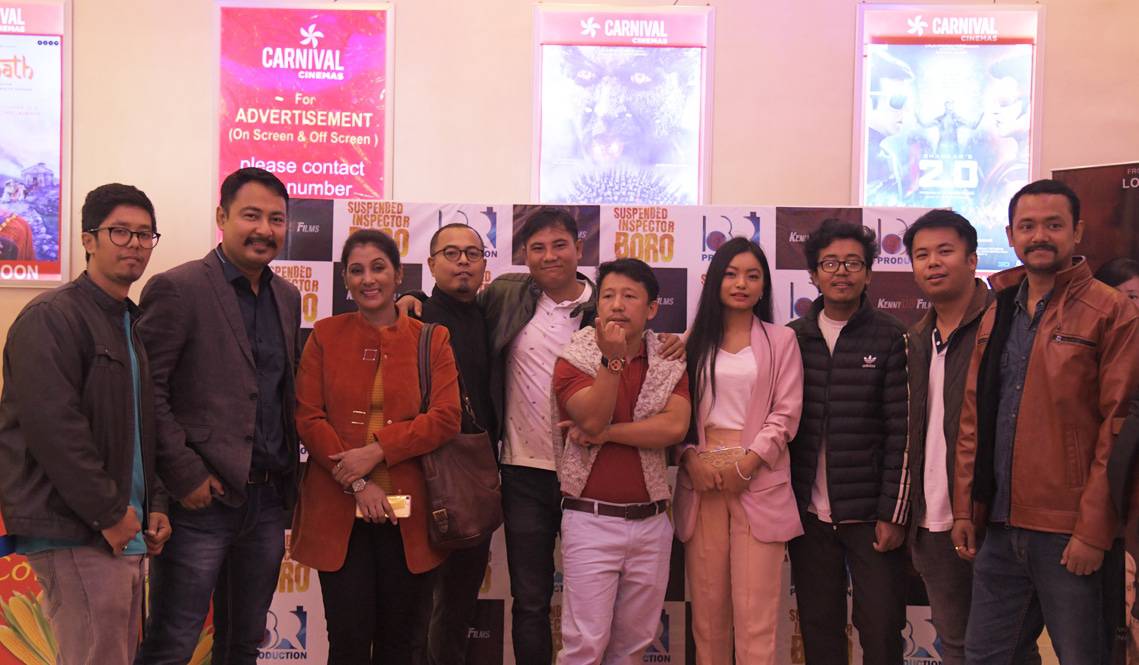 A Hindi version of Suspended Inspector Boro is also being prepared. All the dialog scenes were shot twice – once in Assamese and once in Hindi. The Hindi version is expected to be ready in January next year. Director Kenny says, “I hope Assamese people will help spread the Hindi version among their non-Assamese friends.”