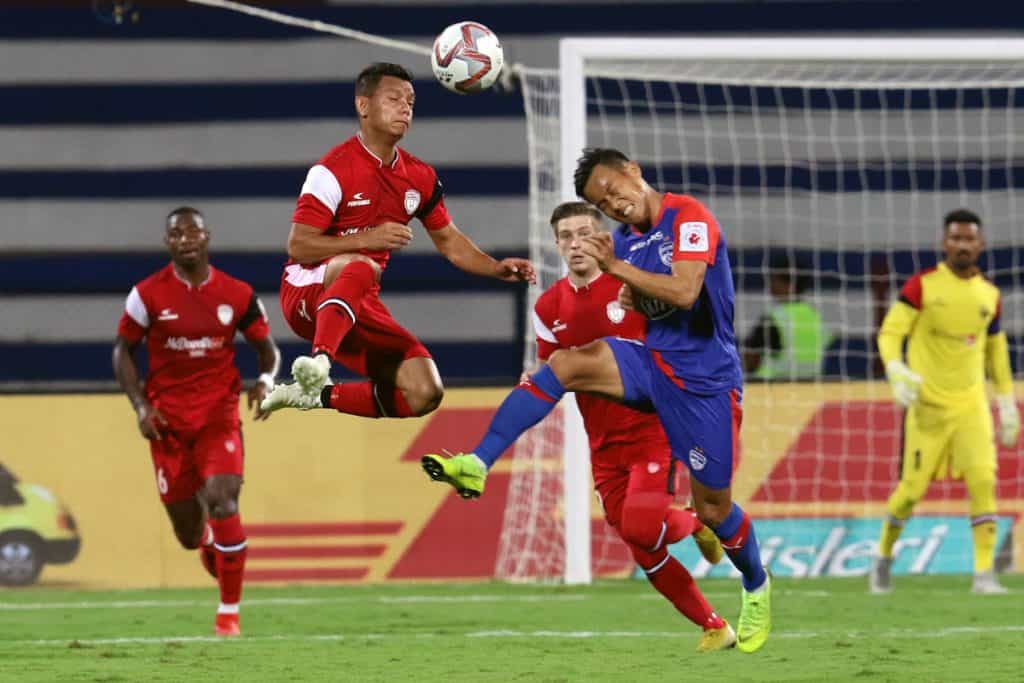 Injury to key players left NorthEast United FC with lesser options as they went down to Bengaluru FC 0-3 in the second leg of the Hero Indian Super League 2018-19 semi final on Monday.

With the win, Bengaluru FC ensured their participation at the final on March 17, to be played at Mumbai. Bengaluru FC sealed their place in the final for the second successive year.

The Blues, who were dominant throughout the game, were made to work hard by a resilient NorthEast United who were finally outdone by a 72nd-minute goal from Miku. Late strikes from Dimas Delgado (87′) and Sunil Chhetri (90+2′) followed as Bengaluru overturned the 2-1 defeat in the first leg.

After a dominant first few minutes by Bengaluru, it was NorthEast United who threatened first against the run of play. Federico Gallego nicked the ball off Dimas’s feet and charged at the Bengaluru defence. The Uruguayan fed Juan Mascia into the box who, with just Gurpreet Singh to beat, shot straight at the goalkeeper from a narrow angle.

With NorthEast United posing a threat from counter-attacks, Miku missed two glorious chances to score in the space of two minutes. In the 23rd minute, Nishu Kumar delivered a delightful cross into the centre of the box from the left flank but Miku headed it over the bar. Two minutes later, Udanta Singh was released down the right flank and the winger’s cut-back from the byline was sent wide from close-range by the Venezuelan striker.

ALSO READ:  We can compete with best in world: Canada coach John Herdman

Miku nearly made amends for his misses with a terrific solo run after the half an hour mark. The striker shimmied past multiple NorthEast players on his way into the box, but sent a weak effort straight into the gloves of Pawan Kumar.

The visitors rang the alarm bell again before the break as Mascia’s thunderous strike from outside the box swerved towards goal but Gurpreet kept his eyes on the ball to make a good save.

Bengaluru got off the blocks quickly after the restart and put pressure on NorthEast United defence but brilliant saves from Pawan Kumar kept NorthEast in the game.

As Bengaluru chased a goal, NorthEast United were pushed further back into their own half as the second half wore on. A cross from the right flank by Xisco Hernandez was flicked into the path of Juanan by Harmanjot Khabra but the defender blasted the ball over the bar from close-range.

Bengaluru finally found the net in the 72nd minute when Khabra found Xisco on the right flank. The Spaniard passed to Udanta who whipped a brilliant cross into the box for Miku who guided the ball into the net with a faint left-footed finish and broke NorthEast United hearts.

NorthEast United desperately sought an equaliser and were caught out on the break by Udanta in the 87th minute. He charged into space from his own half and attempted a chip that ricocheted off the post into the path of an onrushing Dimas who slotted home.

A desperate NorthEast United was punished again in added time. Chhetri played a one-two with Udanta and dribbled into the box. With just Pawan Kumar to beat, the Indian international skipped past the goalkeeper and caressed the ball into the net to spark jubilant scenes in Bengaluru.