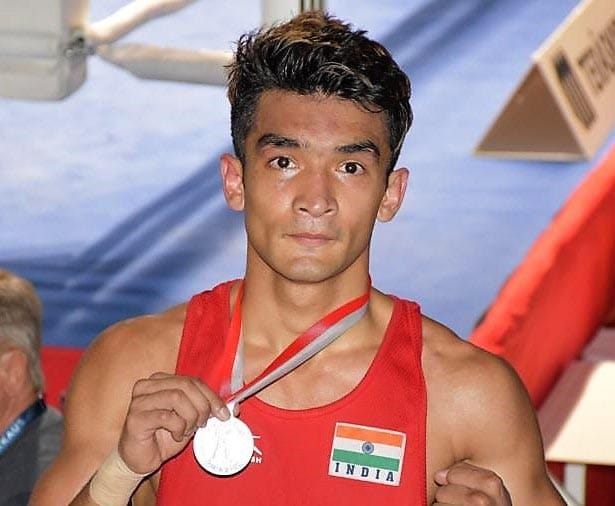 Shiva Thapa with the medal

Indian men boxers collected a rich haul of 8 medals, including one gold, four silver and three bronze medals to finish their campaign on a high at the 38th GeeBee Boxing Tournament in Helsinki, Finland.

Services boxer Kavinder Singh Bisht grabbed the gold medal in the 56kg category after getting the better of his Indian counterpart Mohammed Hussamuddin in the summit clash, who settled for silver. Bisht put up a flawless performance to outclass the 2018 Commonwealth Games bronze medalist 5-0 in a thrilling all-Indian final.

The Uttarakhand boxer gave an audacious display overcoming a cut sustained above his right eye to secure his maiden international gold in the bantamweight category.

The other silver medals for India were won by Govind Kumar Sahani (49kg), Shiva Thapa (60kg) and Dinesh Dagar (69kg).

Squaring off against Thailand’s Thitisan Panmod in the finals, Sahani made a strong start clinching the opening round unanimously. However, the Thai boxer found his way back with the judges favouring him in a split 3:2 decision in the end.

The fourth and the final silver medal was won by 2018 India Open silver-medallist, Dinesh Dagar who faced two-time European silver-medallist Pat McCormack in the summit showdown. The Indian entered the bout with a heavily swollen left eye due to an injury sustained in the semifinals and fought aggressively before the referee stopped the contest (RSC) a few seconds into the third round and had to settle for silver.

Signing off with bronze medals were Sachin Siwach (52), Sumit Sangwan (91kg) and Naveen Kumar (+91kg) after their respective semi-final loss. The former world youth champion, Sachin incurred a 1-4 defeat against Kyrgyzstan’s Azat Usenaliev while Sangwan suffered a similar fate after a 0-5 loss to England’s Chevon Clarke.

Northeast states to vote on April 11, 18 and 23; simultaneous assembly polls in Arunachal, Sikkim