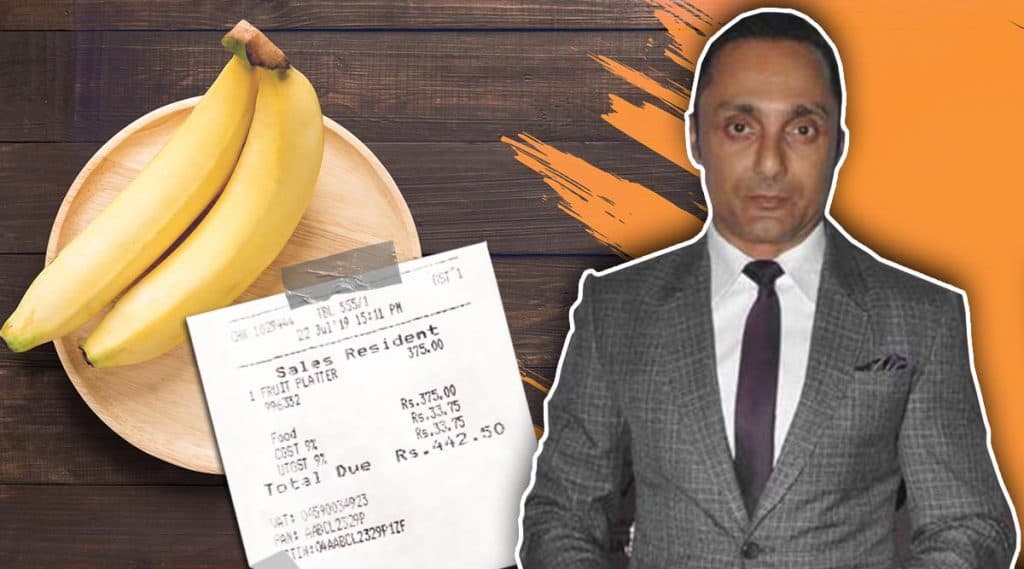 The Federation of Hotel and Restaurant Association of India clarified that the five-star hotel which charged actor Rahul Bose Rs 442 for two bananas has done nothing illegal.

Rahul Bose who was staying at a 5-star hotel in Chandigarh recently, got a massive shock. The actor ordered room service for two bananas, but when the bill arrived, he was in for an unpleasant surprise. For the two bananas that he ordered, the hotel charged Bose Rs 442.50.

In an e-mailed statement, FHRAI also reiterated that charging 18 percent GST was a legal requirement incumbent upon the hotel.

“Chain hotels have presence across several cities and follow Standard Operating Procedures (SOPs). We need to understand that the hotel is not engaged in the sale and purchase of fruits and vegetables but it provides service of accommodation as well as restaurant service which include supply of food and beverages to its guests. Unlike a retail store where bananas can be purchased at market price, a hotel offers service, quality, plate, cutlery, accompaniment, sanitized fruit, ambience and luxury and not the commodity alone. A coffee available at ten rupees at a roadside stall could be served at Rs 250 in a luxury hotel,” Gurbaxish Singh Kohli, vice- president, FHRAI, was quoted as saying.

FHRAI also clarified that the hotel has done the ‘right thing’ by charging 18 percent GST on F&B served in the hotel premises. GST laws are not optional, but are to be charged to the customer and passed on to the Government as per provisions of the law.

It further stated that the rate for supply of services including goods by a restaurant is 9 percent CGST and 9 percent UT GST. It stated that the hotel has correctly charged the Goods and Service Tax (GST) on the bill which was legally payable by the customer.

“Food served within the premises of a hotel with a declared tariff for accommodation of Rs 7500/- per day and above is chargeable under Services Accounting Code 9963 at the rate of 9 percent CGST and 9 percent UT GST. So, while bananas, or other unpacked fruits, are outside purview of GST at a retail store, when served in a restaurant or hotel, whether as a fruit platter or a whole fruit, as per existing GST laws a levy of 18 percent is applicable. This is what the laws demand of us, and we don’t have a say in the matter,” said Pradeep Shetty, joint honorary secretary, FHRAI.

However, the apex hospitality body has issued an advisory to its members on ways to handle such situations where a guest may have ordered eatables, including fruits, from outside the menu.

ALSO READ:  Article 370 was temporary provision that was put to rest, says Jaishankar

“Our immediate concern is conflict resolution and for such a situation to not repeat. We do not wish for guests to experience a situation like this and are deliberating on possible measures that hotels could take. We will advise our members to sensitize the staff on the subject and will advise precautionary measures to avoid such happenings in the future,” concluded D V S Somaraju, honorary treasurer, FHRAI.

The Federation of Hotel & Restaurant Federations of India is the apex body of the Indian Hospitality industry.