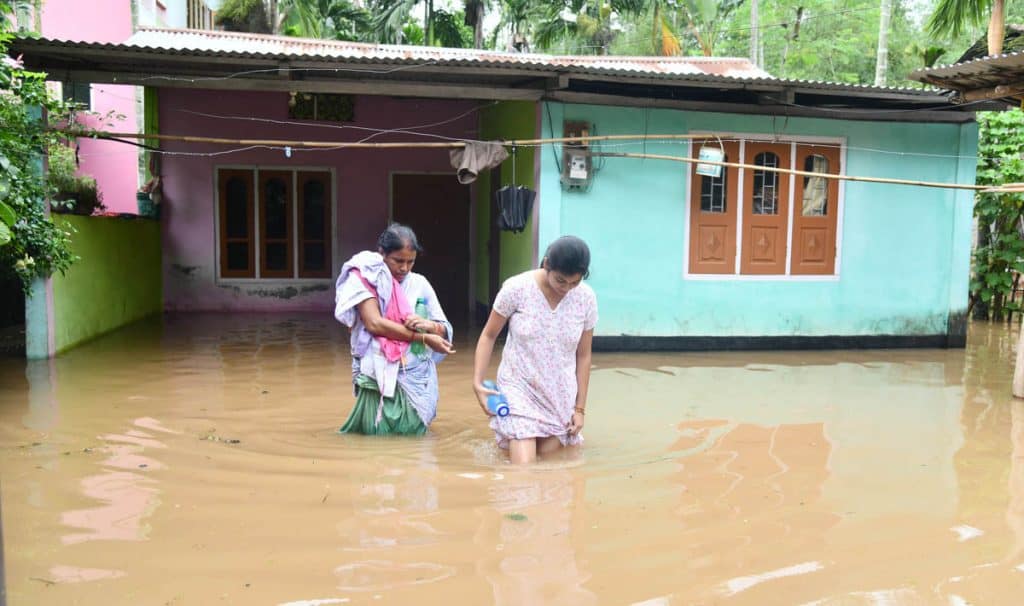 Villagers wade through flood water near their partially submerged house in the flood affected Chaygaon village in Kamrup district.

The flood situation has turned further grim in Assam with 14 lakh population affected by as on July 13. So far seven people have lost their lives in flood and landslide in the state.

Army has been deployed in rescue and relief operations in some places, while train movement remained suspended for the second day in the hills district.

So far, a total of 14,06,711 number of the population have been affected in the recent wave of flood in the 25 districts.

The Brahmaputra was flowing above the danger level in Jorhat, Sonitpur, Kamrup, Goalpara and Dhubri districts.

Moreover, Burhidehing was flowing over the red mark in Dibrugarh, Subansiri in Lakhimpur, Dhansiri in Golaghat, Jia Bharali in Sonitpur, Kopili in Nagaon, Puthimari in Kamrup, Beki River in Barpeta, Barak in Cachar and Karimganj, Katakhal in Hailakandi and Kushiyara in Karimganj districts.

In Balipur Char, Baksa district, army troops were requisitioned by the district administration to carry out the rescue operation and evacuate the stranded villagers.

The railway track was severely affected on at km 110/4-5 between Jatinga Lumpur – New Harangajao station in Lumding – Badarpur hill section under Lumding Division of N.F. Railway.

The repairing work has already started on a war footing and senior railway officers are camping at site monitoring the restoration work. But heavy rain is continuing in that area making the soil loose.

It is expected that the restoration work will be completed by July 16, if the weather condition does not deteriorate further.

As a result, at least 15 trains have either been cancelled or short terminated.