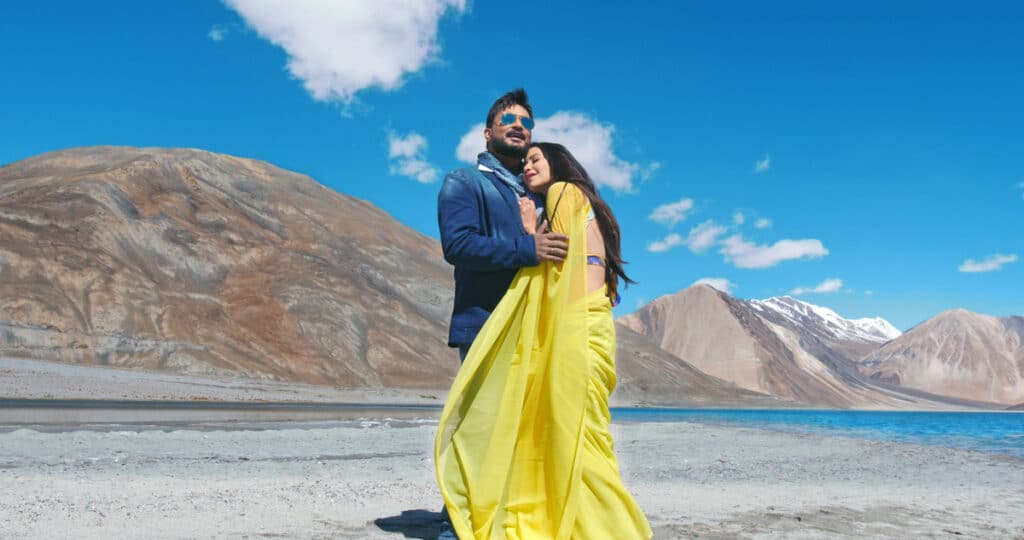 A scene from the Assamese film Ratnakar by Jatin Bora

Making his comeback after 13 years as a filmmaker, actor Jatin Bora is gearing up to present his new film Ratnakar. The much anticipated big-budgeted film, produced under the banner of JB Films, will hit the screens on October 11, soon after the conclusion of Durga Puja.

Donning the director’s hat, Jatin Bora has assured that his venture is not a run-of-the-mill Assamese film but promises something more. Depicting three different stages of a man’s life, Ratnakar is built around a father-daughter relationship – a topic which was not adequately explored in Assamese cinema.

Ratnakar boasts of a number of notable professionals, known for their creative abilities in their respective fields, which has enriched its production and aesthetic value. Bora has surrounded himself with people with whom he has built up good rapport over the years, whether it’s from cinema or theatre. He has roped in no less than the prolific dramatist of mobile theatre – Abhijeet Bhattacharya, to pen the film’s story, script and dialogues. As expected, the film’s music, scored by Zubeen Garg, has caught on with the public in a big way, notching up chartbusters like Raati Raati, Eta Kotha and Bhaal Puware. Zubeen Garg deserves due credit for composing songs which have enraptured the public, especially the youth.

Armed with the experience of working in around 50 Assamese and other language films, Jatin Bora, who has produced Ratnakar along with his better-half Navanita Sharma Bora, is quite happy with the film’s final output.

Ratnakar’s camerawork has been done by Pradip Daimary, who has left quite an impact with his work in a number of films. The aerial photography is done by Jaydeep Paul. The lyrics have been written by Zubeen Garg, Sasanka Samir and Rahul Gautam Sharma. The playback singing has been done by Zubeen Garg, Gayatri Hazarika, Satabdi, Navanita Sharma Bora, Joshua, Chayanika and Harshita Bhattacharjya. The background music, which sets the film’s emotional tone, is scored by Poran Borkatoky and Bibhuti Gogoi. This dream project of Jatin Bora and Navanita Sharma Bora, which features all the successful ingredients of mainstream cinema, has been shot in Guwahati, Jorhat, Dibrugarh, Meghalaya and the scenic landscapes of Ladakh, where the popular romantic song and one of the film’s highlights – Raati raati xun mur xopun bure, was picturised on Jatin Bora and Barsha Rani Bishaya. Ashrumika, who makes her feature film debut, has acted as the child version of Lord Krishna in the popular annual event ‘Sampurna Raas Leela’, organised by Basanta Kumar Baruah and Bobby Baruah, for a number of years now. She plays a feisty character, who grows up under her father’s care, even as he struggles to provide for her.

The script has offered considerable scope for creativity for the gifted Jatin Bora, who brings his multifaceted character to life. Despite the passage of so many years, he still possesses lively enthusiasm and a good amount of stamina.

The film’s editing and visual promotion is done by Protim Khaound. The sound designing is done by the much experienced Debojit Changmai. The songs are choreographed by Deepak Dey, Uday Shankar, Pankaj Ingti and Sachin Baruah. The makeup has been done by Biswajit Kalita. The art direction is handled by Jyoti Shankar Bhattacharyya and Navanita Sharma Bora (for the Meghalaya segment). The action scenes are directed by the fight master of south Indian films, Rajesh Kanan.  Mumbai-based Rajesh Yadav has worked as the film’s DI Colorist. The film’s associate director is Manujit Sharma. The chief assistant director is Anupam Baishya. The assistants are Hemanta Gogoi and Anindita Kalita. The publicity still-photography is by Anup Baruah, while the location still-photography is done by Pallav Mahanta. The film’s production manager is the much experienced Manoj Kumar Mishra.

Ratnakar’s music and poster have already been released.