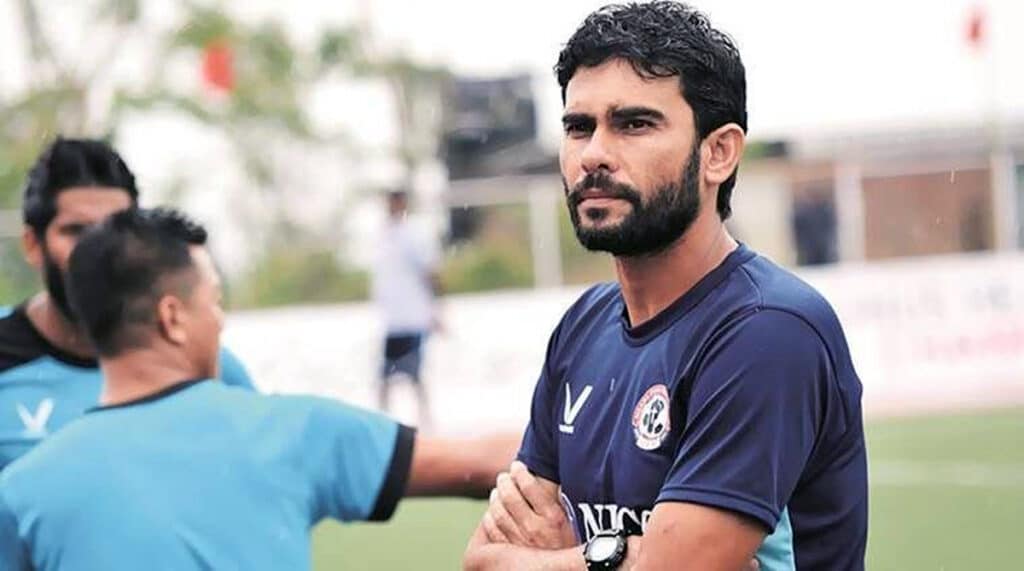 One of the most sought-after football coaches of the country, Khalid Jamil, who recently joined NorthEast United FC as head of its academy and assistant coach of the team, has vowed to give chances to the talented players from the region.

Jamil, who scripted history to win the I-League on its debut with Aizawl FC in 2016-17, has been spending time with the local tournaments in Guwahati to spot young talents.

“My message to the young footballers here is that I have come here to develop the scene. I will try to give chances to everybody (players who will be selected) from Guwahati and the region. I will help the players to play in the senior ISL team and also help them to play even in the senior national team,” Jamil told The News Mill at the Nehru Stadium in Guwahati where he was watching the GSA Super Division League matches.

Jamil joined the Guwahati-based ISL club from Mohun Bagan in June this year. He is working to form the reserve team for the NEUFC. His primary role at the club would be to nurture and groom talent from across the region and oversee the expansion of the club’s residential academy.

“I am working towards that. At this moment I am looking for talents in Guwahati, Shillong and other places to form the reserve team.  We have come here (Nehru Stadium) to watch the local boys play. We will choose talented upcoming players from here for maybe our senior team or the reserve team. We want to give opportunity to every talented player,” said the 42-year-old coach.

He further said that they will announce dates for the selections trials in different places depending on the ground availability for teams – Under 13, 15, 18 and for the reserve team.

“Our goal is to turn this system into one of the best in the country with the ability to cater to over 200 youth prospects at a time. In my capacity as assistant coach to the first team, I look forward to working in the ISL for the first time and am confident that we can top last year’s excellent season,” said Jamil who started his managerial career with Mumbai FC in 2009.

Jamil, who was born in Kuwait to Indian parents, coached Aizawl FC to an I-League title triumph in 2016 on its debut which is considered as one of the biggest achievements in the history of Indian domestic football.

Remembering his days at Aizawl FC, Jamil said it was ‘unbelievable experience’ in Mizoram.  Further speaking on the football in the region, Jamil said that he always enjoyed working with the boys here because of their hard working attitude.

Jamil started his club career with the now-defunct Mahindra United in 1997. He is hopeful with the team India as he believes that these days the players are highly knowledgeable.

“It’s improving. They are also learning a lot because of the new experience coaches who are coming here,” he said.