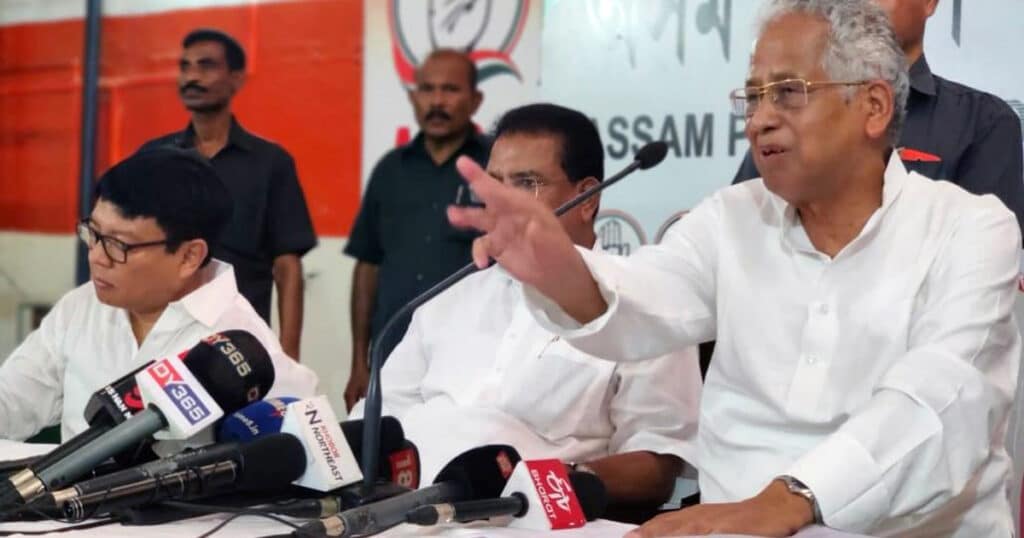 Congress leaders speaking at a press conference in Guwahati

A day after the publication of final and updated National Register of Citizens (NRC) for Assam, former Assam chief minister Tarun Gogoi on September 1 alleged that the ruling BJP intentionally wanted the NRC to fail.

“One has to say that the government wanted the NRC to fail. And it intentionally wanted it to fail so that it can keep the foreigners issue alive,” he said.

The former three-time chief minister was addressing a joint press conference with state Congress president Ripun Bora and Leader of Opposition in the state assembly Debabrata Saikia at the party headquarters in Guwahati.

Gogoi further questioned the provision of those excluded from final NRC having to approach the Foreigners Tribunal for inclusion of their names. He said, “The BJP-led government has been repeatedly saying that those not included are not foreigners. If they are not foreigners, then why should they approach the Foreigners Tribunal?”

The veteran Congress leader also questioned Assam Chief Minister Sarbananda Sonowal’s silence over the final NRC. “The state BJP president Ranjeet Kumar Dass has rejected the NRC, their minister Himanta Biswa Sharma has called for re-verification. But the chief minister is silent. He should tell the people whether he accepts or rejects the final NRC,” Gogoi said.

He also hit out at former CM Prafulla Kumar Mahanta, who was among the leaders of the anti-foreigners movement in the state. Gogoi said, “Mahanta had said there are 40-50 lakh illegal foreigners, and now he is saying that he is satisfied with the final NRC.”

State Congress president Ripun Bora, also speaking to the press, demanded that the people whose names have been excluded should be given the reason for it.

The final and updated NRC for Assam was published on August 1, with names of 3.11 crore applicants included in it and 19 lakh exclusions.