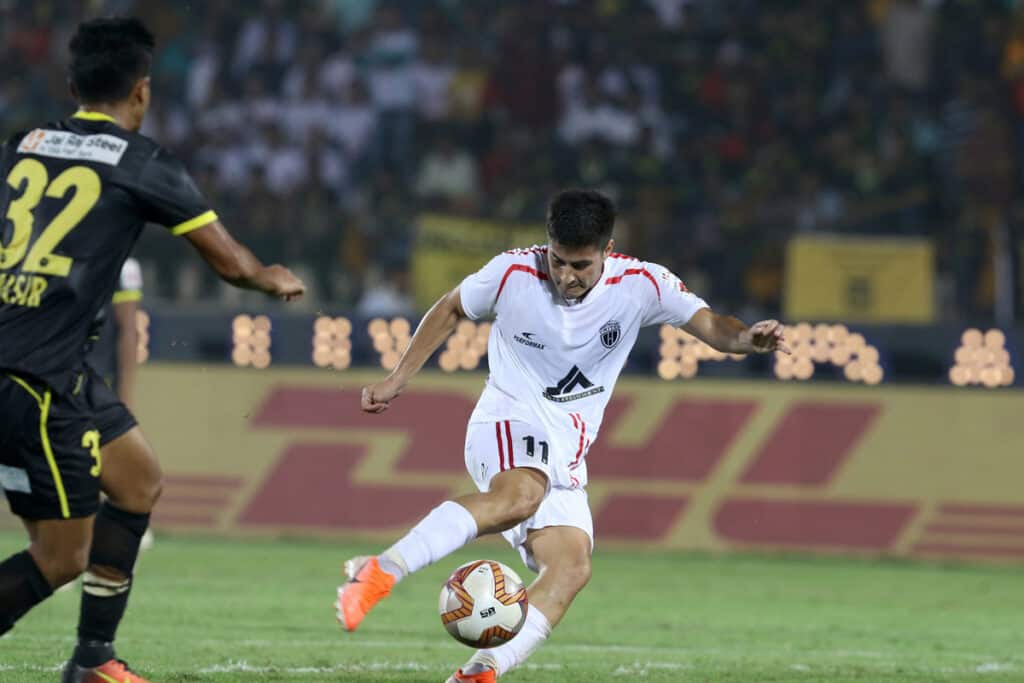 Martin Chaves of Northeast United FC in action against Hyderabad FC on November 6, 2019

A late Maximiliano Barreiro penalty proved to be the difference as NorthEast United FC defeated Hyderabad FC to climb to the top of the Hero Indian Super League standings at the GMC Balayogi Athletic Stadium in Hyderabad on November 6.

The teams had their fair share of moments in a closely-contested tie, but a handball in the 86th minute helped NorthEast United edge past their opponents.

Robert Jarni’s team remain unbeaten and have eight points from four games, while Hyderabad sit 9th on the table with three points.

The hosts were quick to take the game to the opposition with Marcelinho impressing in the final third. Four minutes into the game, the Brazilian forward dribbled into the box, executed a step-over to outfox Mislav Komorski and thumped the ball towards the goal from a tight angle, forcing goalkeeper Subhasish Roy Chowdhury to make a low save.

Hyderabad FC was aggressive in their approach throughout the first-half, but their final ball lacked the threat to fetch an opener. At the other end, the visitors struggled to make an impact and failed to test the goalkeeper in the opening 45 minutes.

Marcelinho once again showed his quality when he danced into the box but his cross towards Gani Nigam in the centre was headed clear.

Redeem Tlang got the better of the hosts’ defence soon after the restart with a clever run in behind the defence. Substitute Maximiliano Barreiro lobbed a well-timed ball for the Indian forward whose powerful shot from an acute angle was kept out by Kamaljit Singh at his near post.

The Highlanders, who sought a way back into the game, suffered a blow when Asamoah Gyan had to be forced off the field due to an injury. His replacement Panagiotis Triadis nearly made an instant impact when he flicked Reagan Singh’s low cross from the right flank towards the goal following a clever run, but Kamaljit was up to the task.

Hyderabad found it difficult to maintain the intensity with which they ended the first half. Mohammed Yasir latched on to an excellent pass by Stankovic but sent his effort wide from inside the box. With clear-cut chances drying up, Rohit Kumar tested the keeper from outside the box after the hour-mark but hit it straight at Subhasish Roy.

There was drama at the end as a Jose Leudo strike from the edge of the box hit Shankar Sampingraj’s hand, resulting in a spot-kick for the visitors. Barreiro stepped up and coolly slotted home from the spot, leaving Kamaljit with no chance and sealing an important win for his team.

Can we brand all films from the region as ‘Northeast films’?