‘Little bodyguard’ Ninthoinganba Meetei trains with his mother during COVID-19 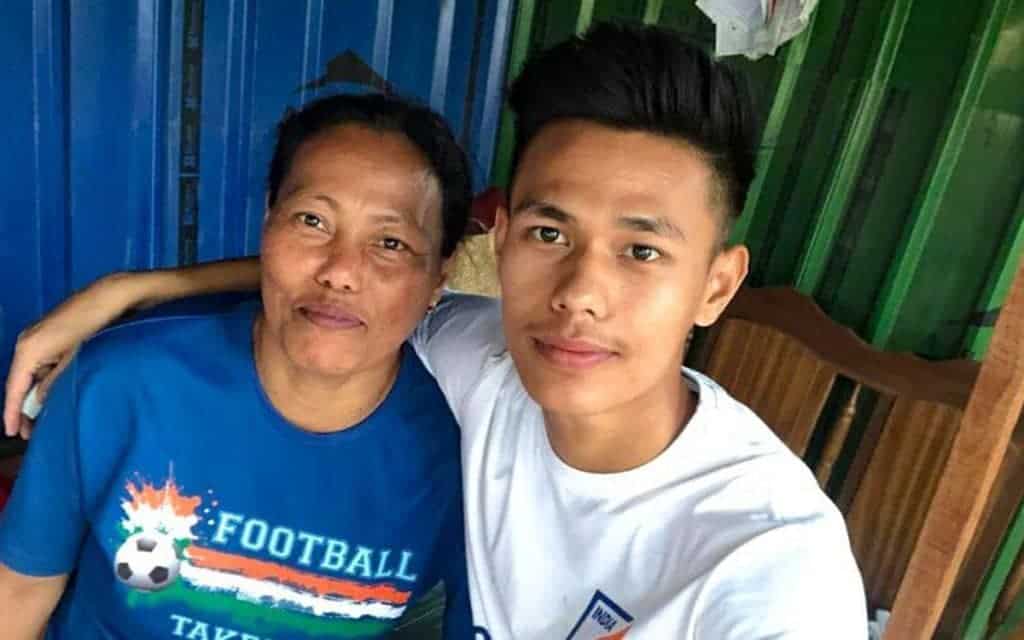 While the world observes the lockdown hoping to see out the COVID-19 pandemic threat, a quaint little courtyard in a suburban area of Imphal, Manipur is buzzing with repetitive thuds of a football.

In the courtyard, the lean yet sturdy figure of Ninthoinganba Meetei is seen running constantly from one end of the yard to the other, returning the ball back over a bench that serves the purpose of a makeshift net.

Over on the other side of the bench stood the curious figure of a middle-aged woman, donning a t-shirt and a sarong. Clearly not as agile as the India U-19 International footballer, she attempts to return the ball with both her hands locked in a volleyball-stance. It is quite clear that she is giving her son quite the run around, but there are huge smiles on both their faces, as the rally keeps going past five or 10 shots.

Ninthoi, as the 18-year-old is fondly called in the dressing room, has been looking at different ways to train while staying within the confines of his home during the lockdown. However, it was the involvement of his mother, Kh Meena Leima, that really helped him find an exercise that lets him both practice his touches on the ball, and also a bit of running.

“I am not used to staying out for too long. I wanted to get back on the field again. While I was kicking it around in the yard, by mother saw me and said that she would help me train. I knew she could not play football, so I was wondering how we could train together,” Ninthoi said to the-aiff.com. But the former U-17 FIFA World Cupper soon found his answer.

“Soon I realised that when she was younger, she used to play volleyball. And she still knows some basics of the game. So I came up with the idea of playing foot-tennis. Only, I would be using my feet, and mom would be using her hands, like you do in volleyball,” he informed.

“This little game that we play has given us both a good workout. Of course, we can’t play when it rains, but it’s a lot of fun playing with my mother. And she’s been enjoying the game too. She hasn’t played volleyball for many years, but now that we have been playing for some time, I can clearly see that she’s getting better,” Ninthoi smiled.

After joining the AIFF Elite Academy in 2013, Ninthoi has had a steady progression through the years. The nimble winger went on to make the India squad in the FIFA U-17 World Cup India 2017, starting in all of India’s group stage matches.

However, it was just a couple of months before the World Cup, that tragedy struck Ninthoi’s family, when cancer took away his father’s life. While his family was not particularly affluent to begin with (his father was a milkman, and did some farm work as well), this tragedy meant that Ninthoi’s mother, had to take to selling dry fish in the markets in order to provide for her children.

“I can’t even begin to describe how difficult that time was for us all. But the courage that my mother showed back then, gives me the strength now. It probably will, for the rest of my life. It certainly gave me the strength to go out there and train every day, even after my father passed away,” said Ninthoi. Redemption was not too far away though, as just months later, Ninthoi got his first professional contract when he signed for the Indian Arrows in the 2017-18 Hero I-League season. Recalling that moment with a big smile, the 18-year-old said, “It meant that my mother did not have to sell fish in the market anymore. I could provide for her and my two sisters.

“She always used to call me her ‘little bodyguard’ whenever I used to accompany her or my sisters to the market or to school. Now I felt that I was really looking after my family,” Ninthoi smiled.

“Now that I am a professional footballer I can safely state that nobody in my family has to sell fish in the markets anymore. But I will never forget my mother’s contribution to my development. Those few months before the World Cup were a difficult time and without my mother’s help, I would never have been where I am today. And as you can clearly see, she is still helping me in more ways than one.”

The young winger has since gone on to play two seasons for the Indian Arrows, lodging 27 appearances in the Hero I-League and the Hero Super Cup, with two goals to his name.

“Those two seasons at the Arrows really helped me develop a lot. I think playing against physically stronger senior players in the Hero I-League prepared me for the challenges ahead. You could really see the results in my performance in the U-18 SAFF Championship last year,” reflected Ninthoi, who was eventually named the ‘Player of the Tournament.’

Following these performances, Ninthoi was snapped up by Hero Indian Super League club NorthEast United FC where he made 11 appearances in the 2019-20 season.

This report is written by Soumo Ghosh for AIFF Media and was first published here.