The nowhere people: Tale of ‘missing villages’ in Assam 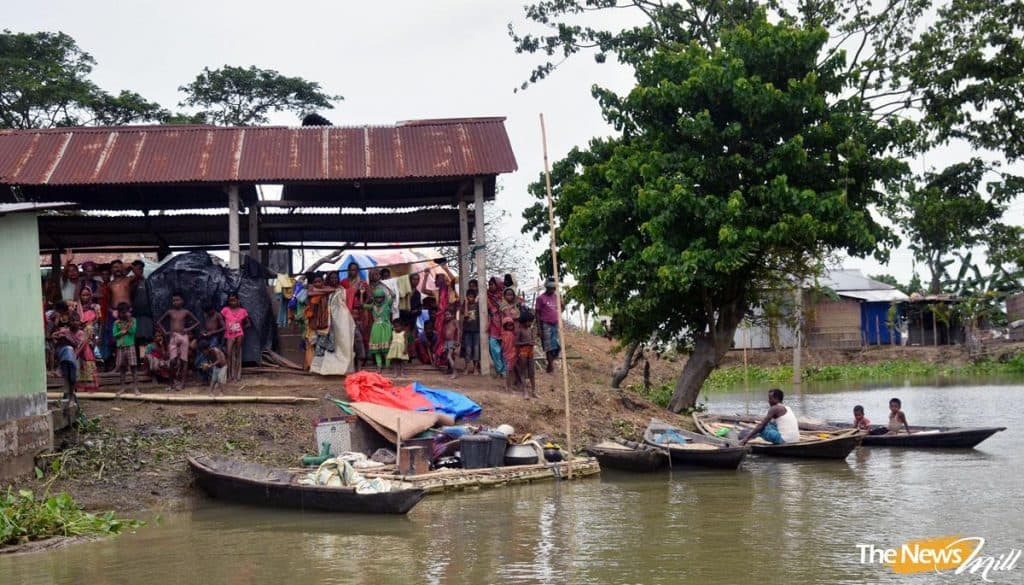 File photo of flood-affected people at a flood relief camp

This time Shamsher Ali is a bit relieved. With his meagre savings he could finally get a place in Dhubri which is at a higher land. After so many years, he won’t have to think about dismantling his home, packing his belongings and move to a new char.

But not everybody is as lucky as him. Like every year, the state of Assam saw massive displacement due to largescale land erosion caused by yearly floods which has turned into a yearly guest, albeit unwanted. According to the state’s revenue department, the state has lost some 256 revenue villages in the last 15 years. In terms of landmass it is a whopping 76,82,10,077 bighas – almost an 8% of the state.

Every year the river Brahmaputra and its tributaries create havoc in the state. So much so that the state loses around 8,000 hectares of land mass on a yearly basis. The land erosion has widened the Brahmaputra to 15 km in certain areas. All this adds up to an economic loss for a largely agrarian state. The river is also dotted by temporary chars formed by silt deposition. These chars rise up and submerge every few years. Few are more permanent and have not been submerged for almost a decade. Dhubri’s Bangshir Char is one such place. However, the risk of erosion is very much there.

Once chars are eroded, the people living there dismantle their homes and move to a new char. These are farmers who have lost land to erosion. Moving to the mainland is a difficult choice. Even when they do, buying land is almost impossible. This is a reason why many such families are forced to encroach on govt land and grazing reserves. In Chanderdinga hillock, the families which were accused of encroachment were people who lost their land to river erosion. In fact people from villages on the river bank have been forced to shift to chars due to erosion.

Similar stories emerge if we move from Dhubri to Sipajhar, Nagaon. The displaced people of Dhubri face some other problems peculiar to the area. Absence of mapping of displaced people can’t give an exact idea about where these people move once displaced. The district also shares border with Bangladesh. While border fencing is almost complete, absurd allegations of large scale immigration is regularly made. This is despite the fact of heavy presence of Border security and marine patrol. This suspicion is laid bare when people from the district move to other parts of the state. The district witnesses a large scale out migration every year as it fails to provide with ample opportunities of livelihood. Once in another district, the language, religion makes these displaced people victim of inherent prejudice reserved for ‘doubtful people’.

The people in this area also suffer from a language issue. While most people study in Assamese medium schools especially in the char areas, the spoken language of Dhubri’s haat and bazaars is different. In Dhubri, the spoken language is Rajbongshi or Deshi spoken by the local people. The people of Chars quickly learn this language as it is more practical. Their knowledge in Assamese however continues to be rudimentary owing to lack of adequate schooling years and problems of the government schools in char areas. But this very fact is overlooked when labourers from Dhubri are routinely harassed for being allegedly ‘illegal immigrants’.

The tyranny of geography is such that poor illiterate, semi literate people living in this border district is often missing in the humanitarian discourse on flood and erosion but figure prominently on threat perspectives to the nation state. Borders define and redefine citizenship. Despite having a rich heritage of its own, the district and its people is often used by political leaders to further politics of polarisation. Geographical contiguity also ensures shared cultural and linguistic transnational identity. Interestingly Kurirgram in Bangladesh which is just a few metres from Bhogdanga in Golakganj is home to a substantial number of Koch Rajbongshi people. A few decades back cross border marriages also happened.

The shared history of border areas is never accounted for. Independence and partition has turned Dhubri which boasted of a port, railway tracks during colonial times and an airport, into a landlocked sleepy quaint town. A small initiative has been started at Sonahat which is one of the border haats on the Indo-Bangladesh border. Only if Dhubri is taken out of the rhetoric of chauvinistic and exclusive politics and put on the map of India’s Act East Policy, the district’s problems might figure in the concerns of policy makers and we can hope for some semblance of solution. Till then Dhubri will continue to be a home to the ‘nowhere’ people of no fixed address.