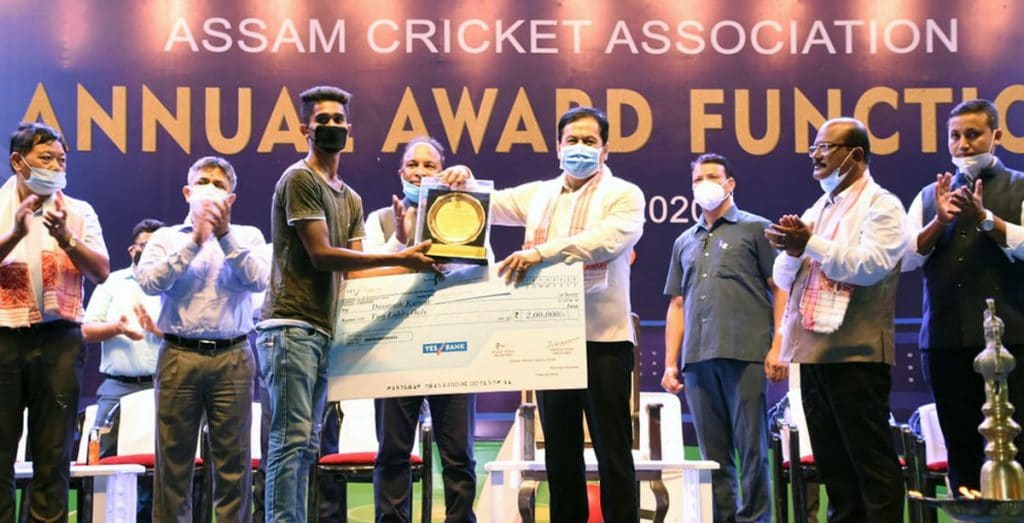 Assam Cricket Association (ACA) introduced an annual award function from this year to celebrate the success of players and boost their morale. The multi-faceted event was held on October 16 at Barsapara stadium in Guwahati.

Assam chief minister Sarbananda Sonowal and the office bearers of the ACA, including president Romen Dutta and secretary Devajit Saikia among others, were present on the occasion.

“I’m glad to present the first annual awards of Assam Cricket Association. Assam cricket is on the rise, and I am sure this annual award will further encourage cricketers, coaches and organisers to do their best for the sport. Sports, education, culture- our aim is to make Assam shine in these fields. You keep on playing, spreading the message of peace, harmony and brotherhood through sports,” said Sonowal.

One-minute silence was observed to pay tribute to young cricketer Bibhakar Nag who died in an accident at Bokajan waterfall during the lockdown.

During the event, the players who had excelled in the season 2019-20 were awarded prizes and cash incentives for scoring a century and capturing 10 wickets in a match and 5 wickets in an innings.

The ACA has also decided to bring as many as 38 cricket coaching centres/academies located across the state under its aegis by providing them with accreditation certificates through its State Cricket Academy (SCA).

During the event, each of these coaching centres/academies, which had earlier fulfilled the norms laid down by Assam Cricket Association, were handed over with one bowling machine along with balls.

Moreover, Level ‘A’ Coaches Certificates were presented to the candidates who had successfully undergone the coaches’ course conducted by the SCA.

The event also witnessed the 37 intra-district club winners of Assam Premier Club Championship being awarded a cash prize of Rs 1 lakh each.