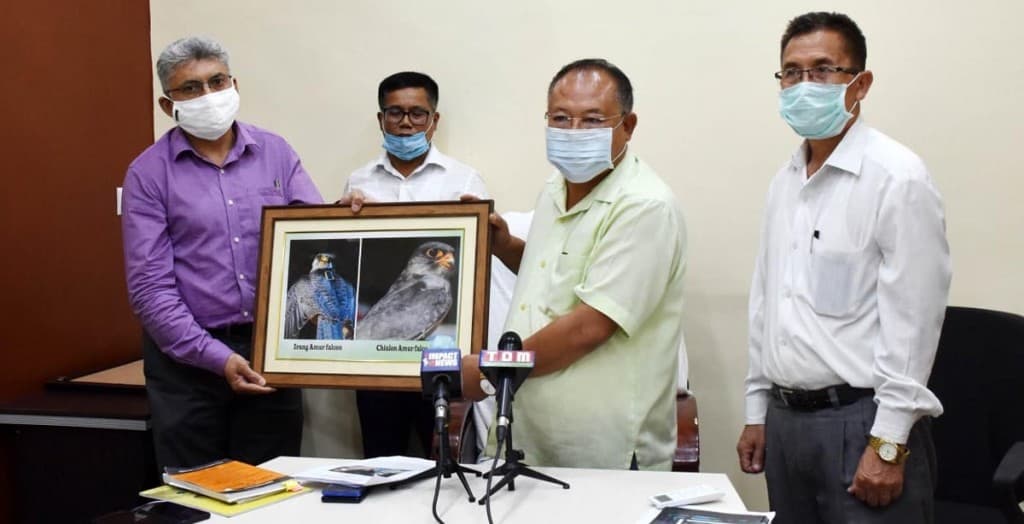 Manipur forest minister Awangbow Newmai and others displaying the photos of the Amur Falcon bird which returned to the state | Image Courtesy: DIPR, Manipur

He said on November 3 that it was a proud moment for the forest department and state that the Amur Falcons have returned after completing its marathon journey to its roosting site in Puching village in Tamenglong district, the village where it was tagged with satellite transmitters and released last year.

Newmai said that the success story of the satellite tagging of the Amur Falcons have ignited hope that the other wildlife projects like Hornbill project, Tiger project among others can also be a successful projects. He assured that more conservation efforts will be carried out for the migratory birds and other endangered animals in the state.

Seeking support from the public, the minister said without the cooperation from all the stakeholders the conservation efforts of the department will not be successful. Giving credit to the general public, all the stakeholders and media, he said that the number of migratory birds visiting the Loktak Lake has increased this year following awareness among the general public.

The two Amur Falcons named Puching and Irang were satellite tagged by experts of the Wildlife Institute of India (WII) along with the officials of the Tamenglong forest division on October 31 in 2019.

Stating that Manipur has set a successful example in the global conservation map, he said the state has shown the effort to protect and provide safe bases to the migratory bird Amur Falcons.

He said the birds, known locally as ‘Akhoipuina’ or ‘Ahoipuina’ in Rongmei dialect roost in the villages of Tamenglong along the Barak river and its tributaries. The birds then migrate to South Africa for which they fly non-stop over the Arabian Sea for five days, he added.

Manipur forest department started the work on conservation of the Amur Falcons in 2015, whereas the conservation work started in Nagaland in 2012 after a uproar following hunting of large number of the birds.

The Amur Falcons start their journey from their breeding ground in North China/Siberia/Northern Mangolian region after that they cross over to Myanmar and arrive in Northeast India for resting and roosting before they make long flight to Southern Africa.

Amur Falcon is protected under both the Wildlife (Protection) Act, 1972 and is included in the Schedule IV of the Act and India is a signatory to the Convention on Migratory Species (CMS), it is mandatory to provide them safe passage and ensure their protection and conservation during their migration.