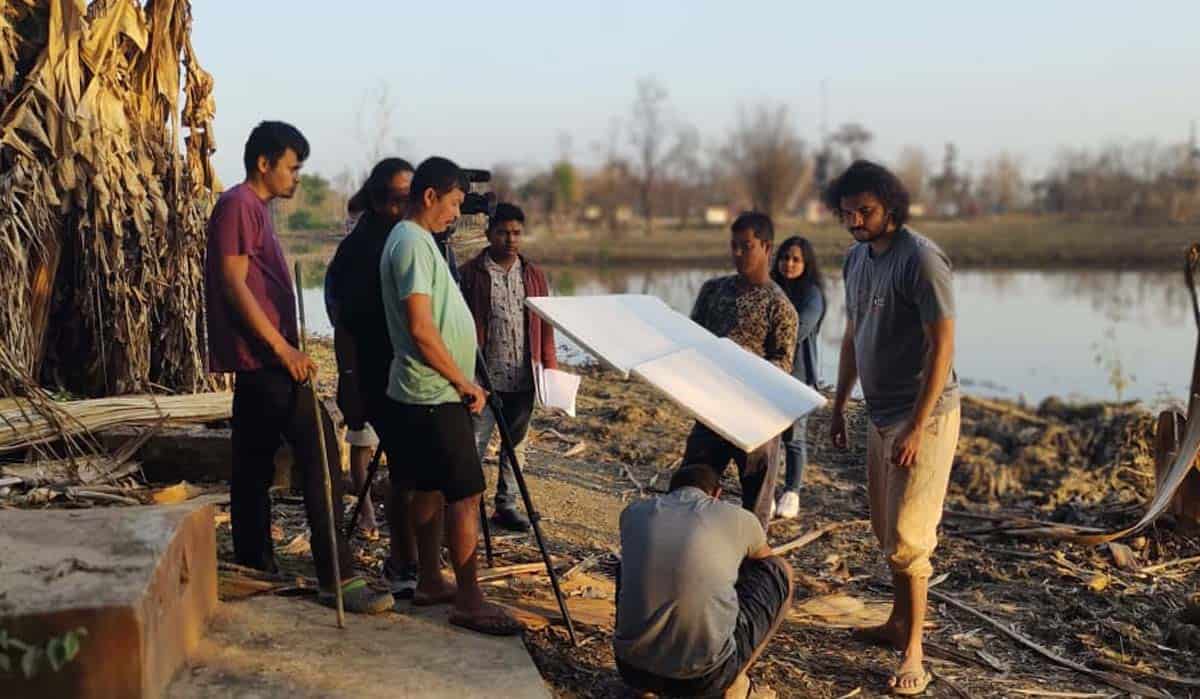 Actors and crew members at the location during shooting at Baghjan

The film, ‘Baghjan’, has been shot at the real locations and the victims have acted in it. The shooting of the film has already been completed and the makers are looking for funds to complete the post-production.

The film depicts the plight of common villagers who are affected by the blowout at Baghjan. It tells the story of Manab, a fisherman his wife, Janeki and a selfish villager Bimal.

“The whole Baghjan episode is heart-wrenching. When the explosion took place, fire gutted houses and properties of those poor families. Their life was hell. The fire, the continuous high-decibel sound and the consistent artificial earthquake and the lives amid the fear is beyond description. I think such a terrible scene is nowhere to be found in the world…,” Dohutia told The News Mill.

“I think it’s very important to tell the story to the world. I have tried my best with the very limited resources which I had.”

While, making the film, the director has cast all the local people, who have witnessed the horror themselves, except Monuj Borkakoty who is a trained actor.

“We have shot in the relief camps where these people were living and their destroyed houses and properties. As a filmmaker it’s a totally different experience. When we were shooting the COVID-19 was at its peak but their (victims) horror was much more than COVID-19,” Dohutia who won national award for his film ‘Haanduk’, said.

Among those who have acted in the film are Jadumoni Barua, principal of a local school and local villagers who are victims – Pranali Bora, Dandeswar Bora, Sabita Bora and Gunawati Hazarika. Hemanta Moran who is the adviser of local Milonjyoti Youth Club also played his part. Apart from that the two child artists are – Barbi and Gargi Gogoi.

The director and team will approach various funding platforms to complete their film which they are planning to release for the viewers somewhere in mid-2021.

“We need some funds to complete the post-production works. So, we are planning to pitch to various platforms. And if someone wills to come forward and help us in completing our project, that is also welcomed,” he adds.

For the entire unit including assistant directors Punyojyoti Moran and Pankaj Chutia and cinematography Nihar Ranjan Gogoi among others it was a different experience to shoot at the Baghjan area for several months.

On several occasions the crew had to shoot in the middle of the night to get rid of the security personnel who were deployed in the locality.

The infamous Baghjan fire was doused on November 15, 2020 after five months. The oil well operated by the state-run Oil India Limited (OIL) caught fire on June 9 following the leakage of condensate and gas on May 27.

32 arrested for embezzlement of scholarship funds in Assam

Northeast India to get 3rd international airport by March