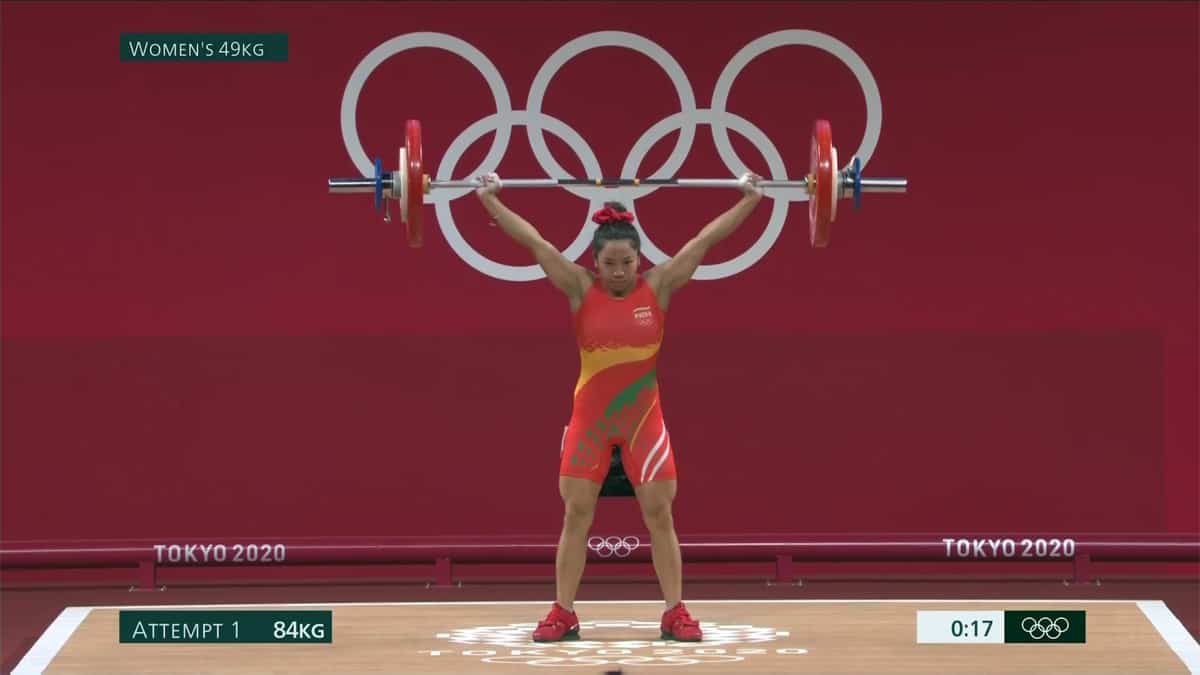 Mirabai Chanu at the Tokyo Olympics

Training tirelessly, staying away from family and maintaining a strict diet for five years finally culminated in the moment Mirabai Chanu had been desperately waiting for – standing atop the Olympic podium. But it almost didn’t happen.

The postponement of the Tokyo Games and a break in training due to the COVID-19 lockdown last year brought with it a shoulder issue for the weightlifter that could have led to a completely different result, something Chanu had been worried about.

“When I started training after the lockdown, my back started getting tight and my right shoulder had some issue. It was not an injury but it would get tight while lifting heavyweight,” Mirabai Chanu was quoted as saying by PTI in an interview.

“It happened because I had stopped training during the lockdown and my body,” she added.

Chanu had been confined to the National Institute of Sports (NIS) in Patiala when a nationwide lockdown was announced last year to curb the COVID-19 pandemic.

Resuming training after months of staying inside her room, Chanu developed the shoulder issue. This severely affected her performance in snatch, one of the two events in weightlifting. To rectify it, she flew to the US to get treatment last year.

Working with Aaron Horschig, a former weightlifter turned physical therapist and strength and conditioning coach, immensely benefited her as she won a bronze at the Asian Championship with a world record clean and jerk lift of 119kg in April.

“That’s why we planned to go to US. That helped me a lot and I was able to create a world record in Asian Championship.”

She again flew to the US for a 50-day camp ahead of the Tokyo Games.

At the Tokyo Games, the 26-year-old brought cheers to over a billion people as she clinched the silver medal with an effort of 204kg (87kg+115kg) in the women’s 49kg category.

“The US physiotherapist worked with me. I have a muscle imbalance. Whenever I lifted a heavy load, I used to be in pain. She would make me do some exercises. That benefited me a lot,” Chanu added.

The imbalance was not the first hurdle Mirabai Chanu had to face in the run up to the Tokyo Games.

After gold-medal winning performances in the 2017 world championship and Commonwealth Games a year later, the Manipuri suffered a mysterious lower-back injury, which led her to miss the 2018 Asian Games.

The back injury marred Mirabai Chanu’s progress in 2018, but the former world champion made a strong comeback after undergoing rehab.

She consistently improved her personal best and looked set for the Tokyo Olympics.

But then the COVID-19 pandemic caused a global lockdown, training was stopped and the Olympics were postponed, something that the Commonwealth Games double medallist wasn’t looking forward to.

“If it’s postponed (the Olympics) there will be a lot of problem because a lot can change in a short period of time for us,” Mirabai Chanu had told PTI last March.

Her worst fears came true as she developed the shoulder issue.

“I had recovered from my 2018 back injury. But then I developed this shoulder issue. I would think a lot about it. Why one after the other something was happening to me?” she said.

Mirabai Chanu said reading about fellow Manipuri N Kunjarani Devi, the most decorated Indian female weightlifter, in her history books inspired her to take up weightlifting.

“While growing up I was inclined towards sports. But I had no idea what to do after getting in also. Slowly I understood that I could do good and make India proud. The history books in my school had information about Kunjrani madam, I was inspired by that,” she said.