Assam on the occasion of World Rhino Day on September 22 burnt 2479 rhino horns which were locked up at the state’s treasuries since long. The state government stated that the move will bust the myth associated with the horns that they possess medicinal value.

Chief minister Himanta Biswa Sarma took part in the public function held at Bokakhat in Golaghat district of the state. He said that it is a historic day for Assam and India as an extraordinary step to burn the largest-ever stockpile of 2,479 rhino horns has been taken to bust the myth and discourage poaching.

He said: “One-horned rhino is not only integral to our civilisation, but also a symbol of our prized heritage and identity. We are preserving 94 rhino horns for display at a museum to be set up at the Kaziranga National Park. The use of rhino horns for medicinal purposes is a myth.”

Sarma said that burning the rhino horns has made it clear that Assam would never trade them and the people of the state do not believe that the horns have medicinal value.

“We would respect and love the rhinos alive and protect them in their natural habitats,” he said.

According to forest and wildlife officials, among the reconciled rhino horns, the heaviest horn weighed 3.05 kg, while the average weight of horns was 560 gm. They said that of the reconciled horns, the longest one was 57 cm, with an average standing height of 13.77 cm.

Assam is home to 71 per cent of the world’s one-horn rhino population. 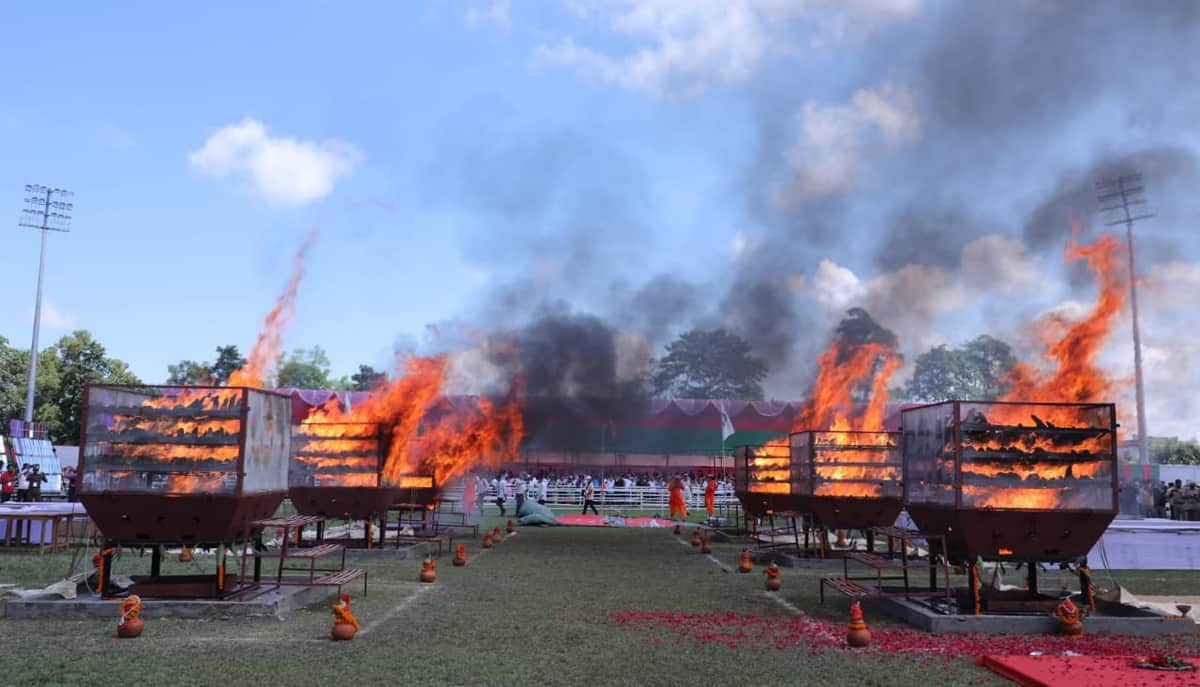 Assam’s forest and environment minister Parimal Suklabaidya, who was also present at the function, said that never before such a huge stockpile of rhino horns have been consigned to flames to spread the message loud and clear that rhino horns are no ‘aphrodisiac’.

“The myth has to be busted to put an end to the poaching of the majestic rhinos once and for all,” he said.

The minister said that the event would send a strong message to the poachers that the horn doesn’t have any medicinal value and its trade is completely illegal.

“Based on pure myth, with no scientific backing, rhino horns are used in traditional Chinese medicines. Due to their demand in some countries, poaching pressure on rhinos is ever persistent and it is intended that consigning rhino horns to flames will dispel these myths and send a strong message across the world,” an official statement said.

Assam presently has an estimated population of 2,640 Indian one-horn rhinos.

The Kaziranga National Park and Tiger Reserve is home to more than 2,400 rhinos, while the rest are in Manas and Orang National Parks, and in the Pobitora Wildlife Sanctuary.

The Assam government has decided to set up a Natural History Museum at the Kaziranga National Park where 94 rhino horns, extracted from animals which had died naturally, will be kept and preserved scientifically as heritage pieces for public viewing and academic purposes.