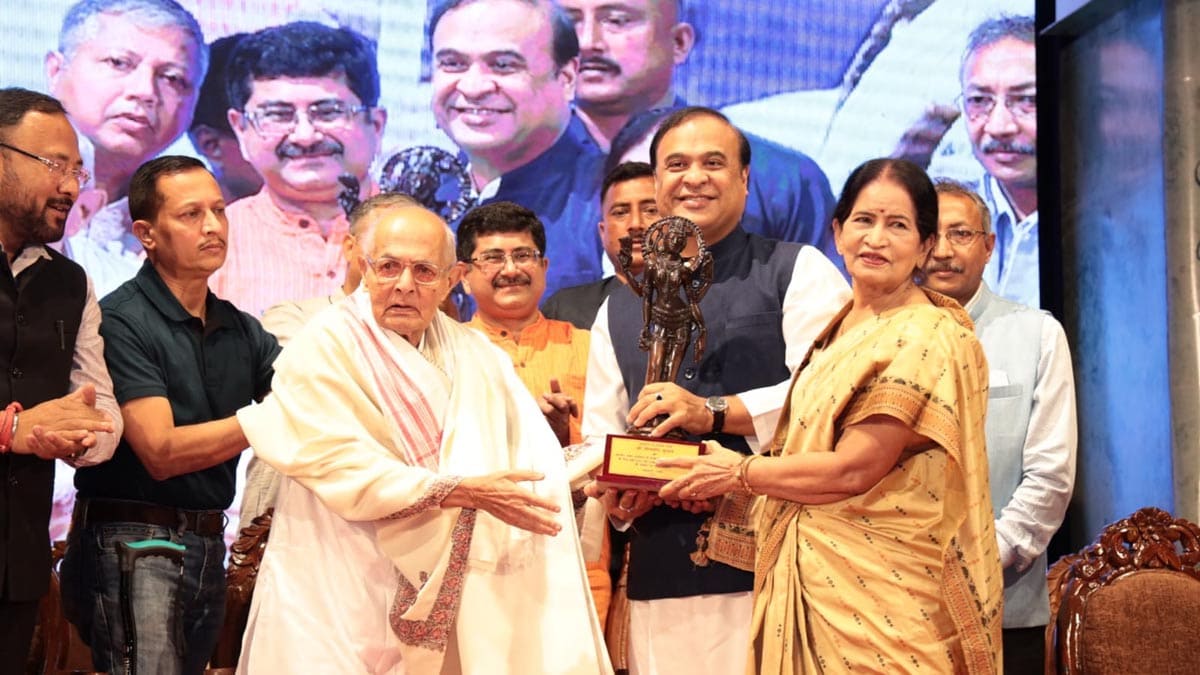 Eminent Assamese poet Nilamoni Phookan was presented the prestigious Jnanpith Award in a programme held at Rabindra Bhawan in Guwahati on April 11.

Organized for the first time in Assam by Bharatiya Jnanpith, the programme was attended by chairperson of Jnanpith selection board Pratibha Ray, Assam education minister Ranoj Pegu, cultural affairs minister Bimal Bora and others.

Chief minister Sarma said that the country’s highest literary honour presented to renowned poet Nilamani Phookan made the people of Assam proud and elated. He said that this honour was a great moment of achievement for the Assamese people and he thanked Bharatiya Jnanpith for presenting the prestigious award to the eminent poet.

Stating that while novelist Birendra Kumar Bhattacharya was the first recipient of the prestigious Jnanpith from Assam, which he received in 1979 and Mamoni Roisam Goswami being the second Assamese Jnanpith awardee got the award in the year 2000, Sarma said that repeating history, poet Nilamani Phookan received the Jnanpith exactly after two decades.

He said that Nilamani Phookan through his dedication to the task of writing poetry over the years and with his uniquely creative language and recurrent use of symbols and imagery gave a new dimension to modern Assamese poetry. He said that by presenting the Jnanpith to Phookan, Bharatiya Jnanpith has infused new energy into Assamese literature.

“Most of the poems of the poet Nilamani Phookan, who created the era of modern Assamese poetry, rich in quality that attracted the reader, have a beautiful picture of nature. Through poetry, he explores life, youth, love, joy, the world’s most common mysteries, nature and many other subjects,” Sarma said while terming him as one of the best poets of the 20th century.

The CM further said that there is a need to take Phookan’s poetry to the world’s readers and expressed a desire to take the initiative through Assam Publication Board to translate his poems.

A pioneer of modern Assamese poetry, Nilamoni Phookan is a staunch advocate of the literary movement in Assam.

Phookan was a history teacher and retired from Arya Vidyapeeth College in Guwahati in 1992.

He is also widely respected for his other literary works and translations.

Jnanpith award was instituted in 1961 and is given only to Indian writers who write in Indian languages and English.