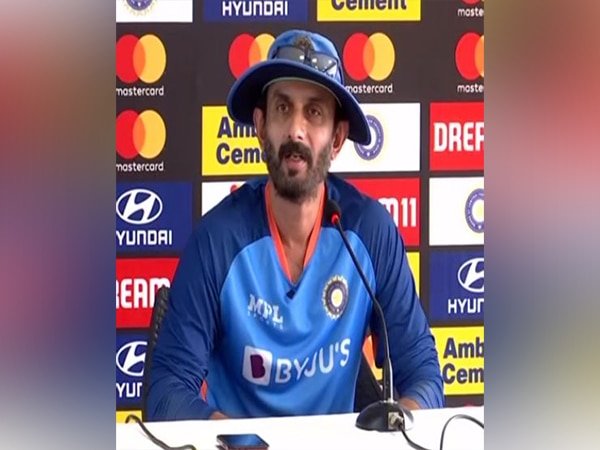 ANI Photo | Adapting to conditions in Australia for T20 World Cup will be biggest challenge for team: India batting coach

Thiruvananthapuram (Kerala) [India], September 27 (ANI): Indian batting coach Vikram Rathour has said the team is looking to improve in all three departments of the game prior to the T20 World Cup next month in Australia and adapting to the conditions there will be the biggest challenge for the team.
Addressing a press conference on the eve of India’s first T20 match against South Africa, the coach said the batters were getting better strike rate and batting with more intent.
“We are close to the World Cup, we have been I think playing pretty good cricket as far as the team is concerned. But still, there are areas that we are looking to improve. That goes for batting, bowling as well as fielding. So we are focusing on all three departments and working hard with the players and I think playing in Australia will be very different to what we have been playing so far. Adapting to those conditions will be the biggest challenge,” the batting coach said.
Replying to queries, he said the team has been putting “par or plus par scores every time we have batted first”.
“Definitely depends on the surface that we are playing on. But when you say that we haven’t been able to put up scores, I don’t agree with that. Batting first was one of the concerns but since the last T20 world cup we have been putting par or plus par scores every time we have batted first. So I don’t think that is an issue,” Rathour said.
“There is a visible shift in the way we have been batting. The approach has changed a bit. We are actually being more aggressive when we are in there. We are I think playing with better strike rates and more intent and I think that is pretty evident since the last World Cup. “We have been able to put par or above par scores,” he added.
The coach defended the bowling unit’s performance in the past matches and said the team was trying to get better at bowling in the last overs.
“We are working on that area. We are looking to get better at defending targets. To be fair to our bowlers, toss has played a vital role everywhere we have played. There’s been due, so it’s easier to chase. I wouldn’t be too hard on my bowlers. If you see they have been able to push the match till the last over every time when we are looking to defend. One ball here and there but we have been doing pretty well. Obviously, this is one area we are trying to get better and hopefully, we will get better,” Rathour said.
The first T20I match between India and South Africa will be played at the Greenfield International Stadium in Thiruvananthapuram on Wednesday.
The home series against South Africa comprises three T20Is and an equal number of ODIs and will be played from September 28 to October 11. (ANI)