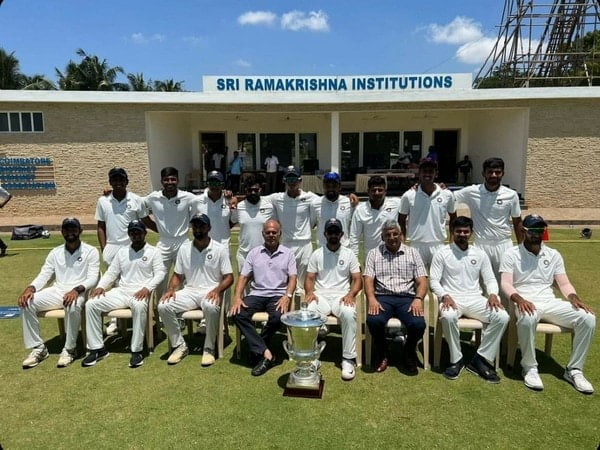 Coimbatore (Tamil Nadu) [India], September 25 (ANI): Ace India batter Ajinkya Rahane expressed his happiness at leading West Zone to the Duleep Trophy title on Sunday.
Yashasvi Jaiswal’s incredible double hundred and fiery spells from Jaydev Unadkat and Shams Mulani helped Ajinkya Rahane-led West Zone clinch their record-breaking 19th Duleep Trophy title as they defeated South Zone in the final by 294 runs in Coimbatore on Sunday.
“What a pleasure it has been to lead the West Zone to a brilliant series win,” tweeted Rahane.
Rahane had a decent Duleep Trophy. He not only captained his team to the trophy, but also scored 250 runs in the tournament in three matches across five innings at an average of 62. This also included an unbeaten 207*.
This double ton comes as Rahane struggles to regain his spot in the Indian Test set-up after being out of form for a long while.
The last time Rahane played for Team India was in January 2022 on a tour of South Africa. Rahane struggled to score well in that series as he could muster only 136 runs in six innings at an average of 22.67 in three matches. He could score only one half-century during the series, with a best of 58.
In two Tests played in 2022, he could only score 68 runs in four innings at an average of 17.00. He had the best individual score of 58.
Rahane did not show his best form in 2021 either. In 13 Test matches and across 23 innings, Rahane scored 479 runs at a sub-par average of 20.83. He could cross the fifty-run mark only twice, with the best score of 67.
Coming to the match, with this win, West Zone has become the most successful team in this tournament’s history with 19 titles with North Zone following them with 18 titles.
Electing to bat first, West Zone put up 270 runs on the board. Het Patel’s 98 and Unadkat’s 47* were of great help for West Zone as they a brilliant Ravisrinivasan Sai Kishore, who took 5/86.
In reply, South Zone scored 327/10, giving themselves a lead of 57 runs. It was Baba Indrajith (118) who rose to the occasion, scoring a brilliant ton. Manish Pandey (48) and Krishnappa Gowtham (43) also played solid knocks. Unadkat (4/52) and Atit Sheth (3/51) did not let South take a huge lead.
Tables turned in West’s favour as Yashasvi Jaiswal (265) and Sarfaraz Khan (127*) helped them reach 585/4 declared in the third innings. It helped them gain a 528-run lead.
Chasing 529, South was bundled out for just 234. They lost the game by a massive 294 runs. Rohan Kunnummal scored 93 while Ravi Teja scored 53 but rest could not just keep going. Shams Mulani weaved a web of spin that bamboozled South Zone batters, taking 4/51. Sheth and Unadkat took two wickets each.
Jaiswal’s 265 earned him the ‘Man of the Match’ title. (ANI)

Awarding wicket to bowler for “presence of mind:” Ashwin to Billing on Deepti’s dismissal of Charlotte