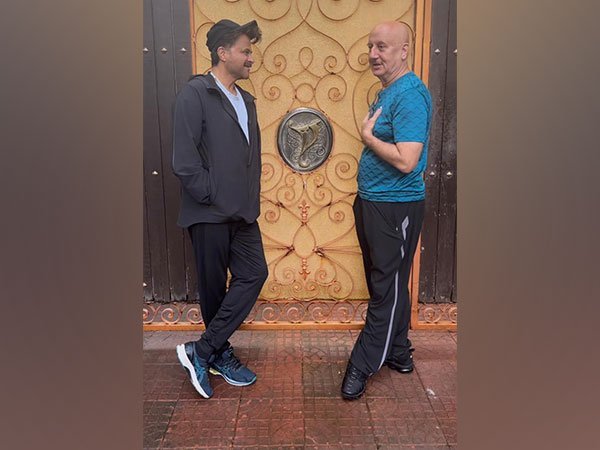 Sharing the video, “In front of Yash Ji’s house: Anil Kapoor and I at #YashChopra stopped in front of the house and refreshed old memories and took blessings! Yash ji has a huge contribution in our (my specially) life! Thank you Sir ji for your love and the moments spent with you! Incidentally today is also #33YearsOfChandni!#Legend #AnupamKher.”
In the video, the actors- Anil and Anupam were seen standing outside filmmaker Yash Chopra’s residence. They were seen discussing about their struggles and both were dressed in sports wear as it seems they have stepped out for a run.
The actors have been spotted together on many occasions. They have done films like ‘Hum Aapke Dil Mein Rehte Hain’, ‘Hum Aapke Dil Mein Rehte Hain’, ‘Ram Lakhan, Roop Ki Rani Choron Ka Raja’, ‘Hamara Dil Aapke Paas Hain’.
And it has also been 33 years since the ‘A Wednesday’ actor blockbuster movie ‘Chandni’ was released. The movie was one of 1989’s biggest box office hits was Chandni. The movie won the National Award the same year in the ‘Best Popular Film’ category. The movie also established Sridevi as the biggest female star of the 80s. ‘Chandni’ also starred Rishi Kapoor and Vinod Khanna. The film was helmed by Yash Chopra.
As soon as the video was posted, the actor’s family and friends chimed into the comment section.
Anupam’s son Sikandar Kher dropped a comment. He wrote,” Yash uncle, Pam aunty and all the Sunday lunches,” with a heart emoji.
Talking about the work front, Anupam Kher is busy shooting for his films ‘Emergency’ and ‘The Signature’. He will also be seen in Sooraj Barjatya’s ‘Uunchai’, which is scheduled to hit the theatres on November 11 this year.
Apart from this, he is super happy to be a part of the Telugu drama ‘Tiger Nageswara Rao’, which is headlined by Ravi Teja.
On the other hand, Anil is currently riding high on the success of his recently released film ‘Jug Jugg Jeeyo,’ which also starred Varun Dhawan, Kiara Advani and Neetu Kapoor in the lead roles.
He will be next seen in an aerial action thriller film ‘Fighter’ alongside Hrithik Roshan and Deepika Padukone. Helmed by Siddharth Anand, the official release date of the film is still awaited. (ANI)