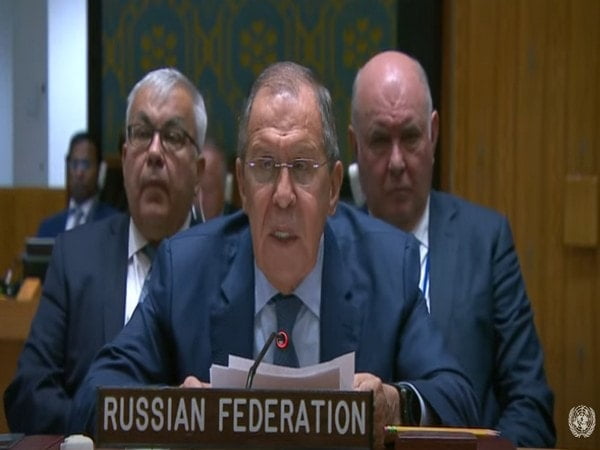 New York [US], September 22 (ANI): Russian Foreign Minister Sergey Lavrov on Thursday accused Ukraine’s armed forces of using “civilians as human shields” and termed the Ukrainian government a “totalitarian Nazi-like state”.
“Ukraine has become a totalitarian Nazi-like state where the norms of humanitarian law are trampled on. There is no surprise that their armed forces in the national battalions are using peaceful civilians as human shields,” Lavrov said in the UNSC briefing on Ukraine.
This comes as Ukrainian President Volodymyr Zelenskyy demanded punishment for Russia for the war in Ukraine, which has left thousands of people killed, displaced millions and reduced towns to rubble.
In a pre-recorded speech at UN General Assembly that focussed on war, Zelenskyy said, “A crime has been committed against Ukraine and we demand just punishment. The crime was committed against our state borders. The crime was committed against the lives of our people.”
“Ukraine demands punishment for trying to steal our territory,” Zelenskyy added.
“Punishment for the murders of thousands of people. Punishment for tortures and humiliations of women and men,” he added.
“Ukraine wants peace, Europe wants peace, the world wants peace, and we have seen who is the only one who wants war,” he said.
“There is only one entity among all UN member states, who would say now, if he could interrupt my speech that he’s happy with this war, with his war.” Zelenskyy said.
Zelensky called for Russia, one of the five permanent members of the UN Security Council, to lose its veto power.
“So long as the aggressor is party to decision making in the international organization you must be insulated from them, at least until aggression stops.”

The Ukrainian leader also called for the creation of a special tribunal to punish Russia. “This will become a signal to all would-be aggressors, that they must value peace or be brought to responsibility by the world.”
Zelenskyy’s address to world leaders came after Russian President Vladimir Putin ordered partial military mobilization in Moscow. Russia plans to conscript around 300,000 troops in an apparent escalation of its Ukraine invasion that began in February this year. (ANI)