Awarding wicket to bowler for “presence of mind:” Ashwin to Billing on Deepti’s dismissal of Charlotte 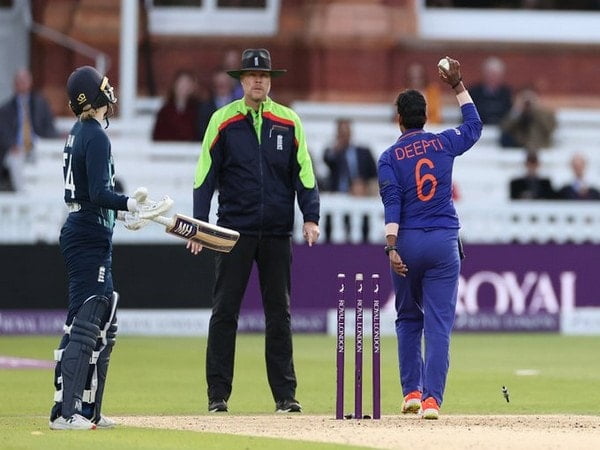 ANI Photo | Awarding wicket to bowler for “presence of mind:” Ashwin to Billing on Deepti’s dismissal of Charlotte

New Delhi [India], September 25 (ANI): The chatter has not stopped yet on India’s Deepti Sharma running out England’s Charlotte Dean at the non-striker’s end in the 44th over of the innings. Many players came in support of Deepti while others have different opinions and stands with Charlotte.
Indian all-rounder, Deepti’s act of ‘mankading’ Charlotte at the non-striker’s end has generated a lot of polarising reactions on social media, leaving the cricketing fraternity divided.
As soon as the match was over, England batter Sam Billings let his displeasure known for the controversial runout while tweeting, “There’s surely not a person who has played the game that thinks this is acceptable? Just not cricket.”
The batter next tweeted, “Imagine how many more wickets you could get James,” while referring to James (Anderson).
However, India’s star spinner Ravichandran Ashwin also jumped into the discussion of non-striker end runout and posted a tweet, suggesting International Cricket Council (ICC) give the award to the bowler for showing “presence of mind” under immense pressure.
“In fact, that’s a great idea. How about awarding that wicket to the bowler for “presence of mind” under immense pressure and of course knowing the social stigma that he/she would have to deal with post doing it? How about a bravery award to go with it too @ICC,” Ashwin tweeted.
With 17 runs needed to win the third and final match of the three-match ODI series, the 10th wicket partnership on 35 and Charlotte Dean edging closer to a fantastic half-century, drama unfolded at Lord’s with Deepti running Dean out at the non-striker’s end in her delivery stride.
Sometimes, the batter at the non-striker’s end leaves his popping crease while the bowler is in his/her final delivery stride. If a bowler sees this, he/she can legally attempt to run out of that batter as per the laws of the sport.
Indian cricket legend Vinoo Mankad first did this during 1947-48 during India’s tour of Australia by running out Australia’s Bill Brown at the non-striker’s end, which earned it the name ‘Mankading’. Though many cricketers argue that it is against the spirit of the game, it is totally legal as per the laws of the sport. (ANI)