Barcelona move to top, cruize to a 4-0 win over Cadiz in La Liga 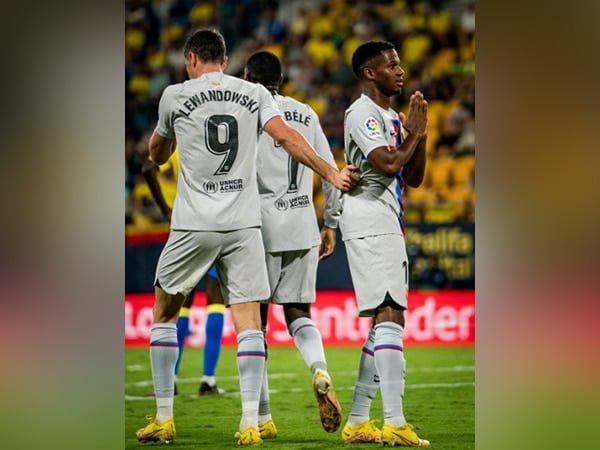 ANI Photo | Barcelona move to top, cruize to a 4-0 win over Cadiz in La Liga

Cadiz [Spain], September 11 (ANI): Spanish club Barcelona moved to the top of the La Liga after securing a dominating win over Cadiz on September 10.
Barcelona had won three, drew one of their first four games, and finished second in the table. Robert Lewandowski has been on fire for them this season, scoring eight goals across all competitions, including five in La Liga. Xavi Hernandez was eager to lead his club to victory, moving them into first place ahead of Real Madrid’s encounter on Sunday.
Cadiz entered this game having lost all four of their first four, allowing ten goals and failing to score. Sergio Gonzalez, the team’s head coach, was keen to end their goal-scoring drought.
Both teams got out to a strong start, playing positive football and not being hesitant to attack. Barcelona enjoyed 75% possession in the first half as they attempted to break down a tenacious Cadiz defence.
Frenkie de Jong and Sergio Busquets dominated the midfield with their swift and precise passing. They scarcely let the ball return to their opponent, moving it from side to side in an attempt to create an opportunity.

Raphinha had a dramatic first half, as he was booked for an unnecessary foul. He also attempted a powerful shot with his weaker left foot, which hit the right post and rebounded out.
Despite the fact that the game was knotted at 0-0 at halftime, Barcelona appeared to be the sharper of the two teams.
The second half began similarly to the first. Cadiz played freely, passing the ball around and trying to get in behind Barcelona’s defence.
Ten minutes after the restart, Frenkie de Jong gave the visitors the lead. Gavi did brilliantly to wiggle past the crowd before assisting de Jong to score. Xavi performed a triple-change shortly after the goal, sensing that the momentum had shifted.
In the 65th minute, substitute Robert Lewandowski scored to increase Barcelona’s lead. The ball was played and then left in the centre of the box untouched. As he slid in, Lewandowski beat Luis Hernandez to the ball and scored to make it 2-0.
There was a significant pause in play beginning around the 80-minute mark because a spectator from the home crowd required immediate medical attention. Cadiz goalkeeper Jeremias Ledesma dashed into the crowd to hand out defibrillators to the doctors.
Following an almost 30-minute pause in play, the game was restarted. Barcelona scored twice before the referee blew the final whistle. Lewandowski initially set up Ansu Fati’s goal and then set up Ousmane Dembele’s late goal. The visitors won convincingly 4-0. (ANI)

SAFF U-17 Championship: India look forward to bouncing back against Bangladesh in semis