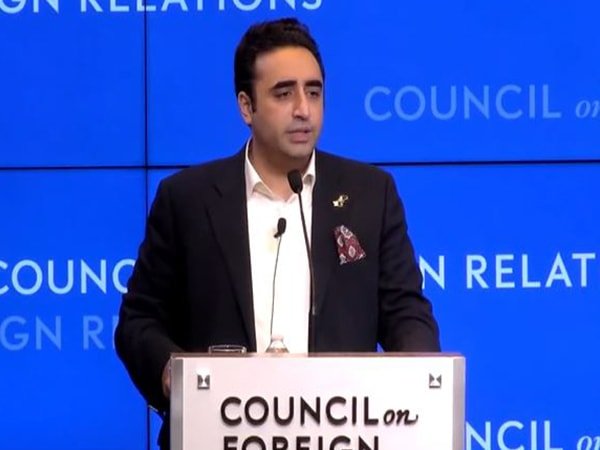 New York [US], September 23 (ANI): Despite devastating floods in Pakistan, Foreign Minister Bilawal Bhutto Zardari on Thursday again raised the Kashmir issue in New York rather than seeking funds for his own country.
Zardari raked up the Kashmir issue and said that Islamabad hasn’t seen any signs of rebuilding relations with India while speaking during a question and answer session following the address to The Council of Foreign Relations in New York.
While replying to a query about rebuilding the relationship with India amid the flood situation in Pakistan, Zardari said, “I haven’t seen any signs of it, at the moment. India is not one of the countries that have offered assistance. As far as my party is concerned, my PM’s party is concerned, we are trying to create a peaceful environment with India, and we have consistently strong advocacy for engagement with India. But India has fundamentally changed.”
Zardari is in New York for the high-level UNGA meeting.
He further claimed that it has become incredibly difficult for Pakistan to engage with India.”
Responding to a question about influencing people to rekindle the India-Pakistan relationship, Foreign Affairs Minister Zardari said, “I think the younger people do have the space in the sense that we are not carrying the baggage of the past as much. Unfortunately, as I mention, even for there of us, in Pakistan, who have been strong advocates for peace with India and engagement with India, the actions of August 2019 have really, truly made it incredibly difficult for us.”
He further said, “US Pakistan ties stand on own merit…we have historic ties.”
“At the OIC Contact Group on Jammu & Kashmir, I highlighted grave human rights and humanitarian situation in #IIOJK. Contact Group adopted a joint communique reaffirming strong support for the legitimate struggle of the Kashmiri people for self-determination #UNGA77 #OIC,” he tweeted for having highlighted the Kashmir issue at UNGA.
Zardari, who is in New York to attend the United Nations General Assembly (UNGA), had earlier made false claims at the UN that India is transforming into a Hindu supremacist state and raked Kashmir issue.
Upon this, India’s Joint Secretary of UNES (UN Economic and Social), Srinivas Gotru gave a befitting reply and said that it is ironic that Islamabad who itself has “committed a grievous violation of minority rights,” is speaking about the rights of minorities.
While speaking at the UN high-level meeting on the Rights of Minorities, an Indian diplomat said, “It is ironic that Pakistan is speaking about the rights of minorities. For a country that has even stopped publishing its data to hide its same shameful record, it is amazing that they have even brought up this subject. It has a long history of having committed a grievous violation of minority rights that the world has ever seen.”
Gotru said that Pakistan continues to commit grave violations of the rights of Sikhs, Hindus, Christians, and Ahmadis. He also said that in Pakistan, 1000s of women and children, particularly girls from minority communities, have been subjected to abductions, forced marriages and convergence.
“The entire Union Territories of Jammu and Kashmir and Ladakh were, our and will always be an integral and inalienable part of India, irrespective of what the representative of Pakistan believes or covets. We call on Pakistan to stop cross-border terrorism so that our citizens can exercise their right to life, and liberty. We hope that they will desist from attempts to abuse and politicize such meetings,” he added. (ANI)