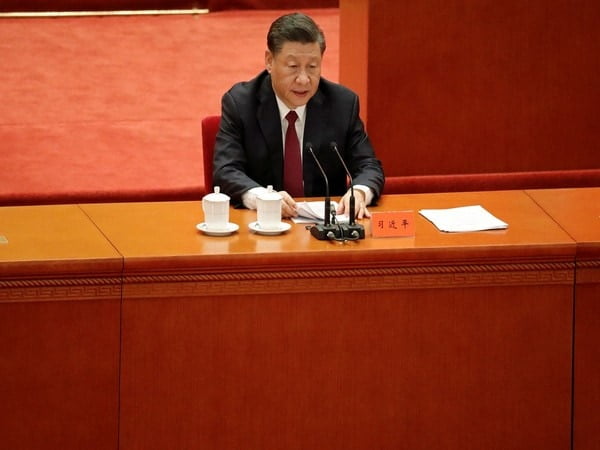 Beijing [China], September 21 (ANI): With the aim to further consolidate Chinese president Xi Jinping’s authority, the Chinese Communist Party (CCP) is expected to amend its constitution at the 20th Party Congress next month.
The Political Bureau of the CCP Central Committee convened a meeting this month to deliberate on documents to be submitted for discussion at the upcoming seventh plenary session of the 19th CCP Central Committee, state news agency Xinhua reported.
These documents included a draft report by the 19th CCP Central Committee to the 20th CCP National Congress, a draft amendment to the Party Constitution, and a draft work report by the 19th CCP Central Commission for Discipline Inspection (CCDI) to the 20th CCP National Congress.
The meeting that was held on September 9 also reviewed a report on the implementation of the eight-point decision on improving Party and government conduct by the Political Bureau of the 19th CCP Central Committee, and a report on the work of rectifying practice of pointless formalities and reducing burdens on those working at the grassroots since the 19th CCP National Congress in 2017, Xinhua reported.
During its meeting, Politburo noted that the actions on corruption since 2017 have borne fruit. According to The HK Post, this is significant because it signals the Party’s willingness to accept “Xi’s Thoughts” as the guiding principles for the future.

“Since the 19th CCP National Congress in 2017, the CCP Central Committee with Comrade Xi Jinping at its core has made new decisions and raised new requirements for constantly improving Party conduct and enforcing Party discipline, (has) made revision to measures of the eight-point decision in this regard, and always puts promoting good Party conduct high on its agenda. Through persistent efforts, some longstanding misconducts have been curbed and deep-rooted malfeasances addressed which leads to significant improvements in Party conduct, the working practices of government officials, social morality, and individual virtues,” the Politburo also said.
The HK Post further states that the other possible change to the Constitution would also be an elevation of the Chinese President’s power to enshrine the “Two Establishes”, a phrase which means the party establishes Xi as its “core” and his ideas as guiding principles.
The amendment could also reinstate the paramount position of Party Chairman, which was abolished in 1982, the report adds.
CCP Constitution can only be amended once in five years when the National Congress is held. It plays a role in regulating and guiding the efforts to uphold the CCP’s overall leadership. CCP’s Constitution was last amended in 2017 when the amendments enshrined “Xi Jinping Thought on Socialism with Chinese Characteristics”.
According to The HK Post, National Congress next month could shorten the ideology to “Xi Jinping Thought”, upgrading its stature to that of “Mao Zedong Thought”. (ANI)