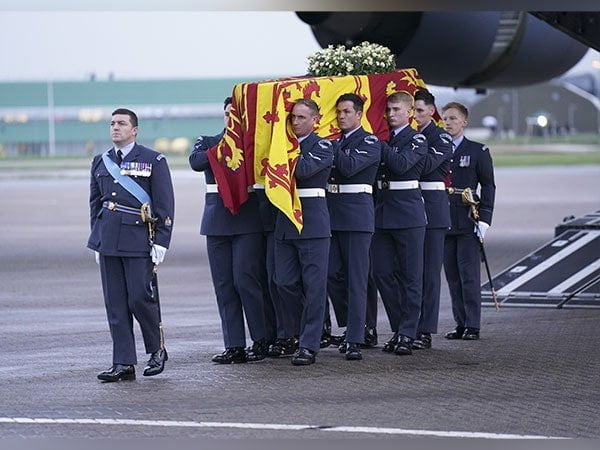 London [UK], September 14 (ANI): The coffin of Queen Elizabeth II arrived at Buckingham Palace from Edinburgh and will rest overnight in the Bow Room of the palace, the Royal Family said.
“Her Majesty The Queen’s coffin has arrived at Buckingham Palace, where it will rest overnight in the Bow Room. Tomorrow the coffin will be borne in Procession on a Gun Carriage of The King’s Troop Royal Horse Artillery to the Palace of Westminster,” The Royal Family wrote on Twitter.
The British queen breathed her last in Balmoral Castle in Scotland on September 8. Following a six-hour journey from After it was taken from the palace of Holyroodhouse to St Giles Cathedral in a procession on Monday, the queen’s coffin was at rest in a Church in Edinburgh for people to pay their last respects to the queen.
It was flanked by the Bearer Party from the Royal Regiment of Scotland and escorted by the King’s Body Guard for Scotland and the Queen’s children at the Palace of Holyroodhouse.
The Queen’s children on Tuesday held a Vigil beside her coffin in St Giles’ Cathedral church.
“The people of Scotland bid their final farewells to Her Majesty The Queen as her coffin travels from Edinburgh to Buckingham Palace,” the Royal Family said.

The death of the 96-year-old Queen ended a generation-spanning, seven-decade reign that made her a beacon of stability in a tumultuous world. The UK has entered a period of official mourning, with tributes pouring in worldwide.
The UK authorities had devised Operation London Bridge to manage events during the first 10 days between the Queen’s death and the funeral and had thought of Operation Unicorn in case the queen died in Scotland. As per the documents seen by The Politico, Thursday was declared as “D-Day” and each following day leading up to the funeral will now be referred to as “D+1,” “D+2” till the tenth of the Queen’s death.
Ten days after Queen’s death, the newly appointed UK Prime Minister Liz Truss will be the first member of the government to make a statement.
Aside from the statement from the PM and other members of the government, gun salutes will be arranged at all saluting stations. Subsequently, Truss will hold an audience with the new king, and King Charles will deliver a broadcast to the nation.
The state funeral will be held at Westminster Abbey on September 19 and there will be a committal service in St. George’s Chapel at Windsor Castle. Thereafter, Queen Elizabeth II will be buried in the castle’s King George VI Memorial Chapel.
The Queen was born on April 21, 1926, at 17 Bruton Street in Mayfair, London. She was the first child of the Duke and Duchess of York – who later became King George VI – and Queen Elizabeth. (ANI)