Day 3 in New York: Energy markets should not be put under stress, says Jaishankar 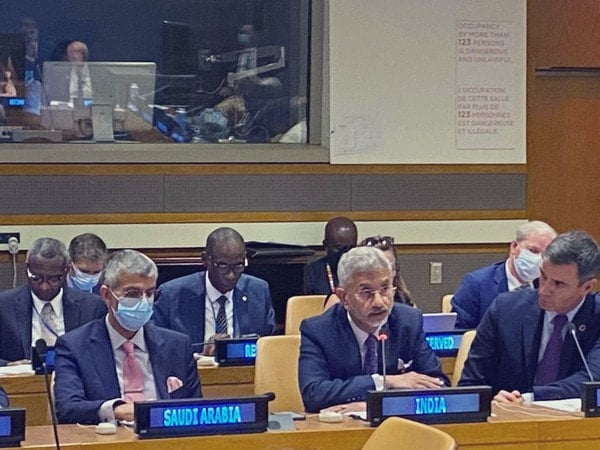 ANI Photo | Day 3 in New York: Energy markets should not be put under stress, says Jaishankar

New York [US], September 22 (ANI): External Affairs Minister S Jaishankar participated in the roundtable conference convened by UN Secretary-General Antonio Guterres and urged that past prescriptions on climate action must be revisited, adding that energy markets should not be put under further stress.
“Participated at Global Crisis Response Group on food, energy and finance roundtable convened by UN Secretary-General @antonioguterres.Emphasized that energy markets should not be put under further stress. Also urged that past prescriptions on climate action must be revisited,” Jaishankar tweeted.
Jaishankar,who is on a 10-day visit to the United States, went to Colombia University on the third day and interacted with Arvind Panagariya, a Professor at the University. In the conversation with the professor, Jaishankar said that for almost 50 years, India regarded the US with suspicion and struggled during the 2008 nuclear deal. It has taken a lot of effort to overcome earlier assumptions and forge the mutual relationship as it stands today.
“Despite the US offering a very clear advantage, we struggled during the 2008 nuclear deal as our innate and deep-rooted suspicion towards the US held us back.”
While speaking at the Colombia University, Jaishankar also said that there is greater support for India’s case to be a permanent member of the UN Security Council and that there is a broad global consensus over the need to reform the Council.
“I do believe that each passing year, I sense in the world that there is greater and greater support for India to be there (UNSC).”
The Minister said that a reform particularly as it does not reflect the realities of the world, asserting that an expanded Council is not only in India’s favour but also in favour of other unrepresented areas.
“Within a few years India will be the third largest economy in the world, it will be the most populous society and not to have such a country in the council- it’s obvious it’s not good for us, but I also think it’s good for the global council,” Jaishankar said while speaking at the Columbia University, New York.
Jaishankar interacted with three presidents and four foreign ministers, on the second day of the 77th session of the UNGA, on Tuesday (local time) at the UN headquarters in New York.
Jaishankar is in the US for the United Nations General Assembly (UNGA) meeting. He met French President Emmanuel Macron, Ghana President Nana Akufo-Addo and Comoros President Azali Assoumani in the US.
Apart from that, the External Affairs Minister also met four of his counterparts including Denis Moncada from Nicaragua, Alexander Schallenberg from Austria, Najla al-Mangoush from Libya and Mevlut Cavusoglu from Turkiye.
To discuss the ongoing cooperation between India and Ghana, Jaishankar called on the President of Ghana at UN headquarters in New York.
Jaishankar has more than 50 official engagements in total. The highlights of Jaishankar’s meetings particularly with developing countries from Asia, Africa, Latin America, the Caribbean and Small Islands are sharply focused on the reform of the UN Security Council.
Jaishankar will address world leaders at the General Assembly on Saturday, after which he will leave for Washington and a meeting with US Secretary of State Antony Blinken. (ANI)