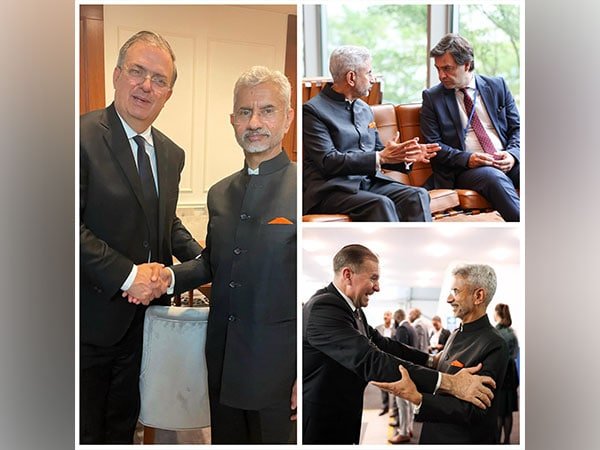 New York [US], September 23 (ANI): External Affairs Minister S Jaishankar on Thursday participated in the BRICS Foreign Ministers’ meeting and exchanged perspectives on the global situation, international economy and regional issues.
Jaishankar, who is on a 10-day visit to the United States, interacted with his counterparts from Mexico, Paraguay and Moldova on the fourth day of his stay in New York.
“A traditional BRICS gathering on the sidelines of #UNGA 77. Exchange of perspectives on the global situation, international economy and regional issues. Made the case for Reformed Multilateralism. Wished Naledi Pandor and South Africa all success for their Chairship,” Jaishankar tweeted.
Jaishankar is in the US for the United Nations General Assembly (UNGA) meeting. He met the Foreign Minister of Paraguay.
“Wonderful to see my dear friend Foreign Minister Julio Cesar Arriola of Paraguay again. The #UNGA is such a great meeting place,” Jaishankar tweeted.
Apart from that, the External Affairs Minister also met the Deputy Prime Minister and Foreign Affairs Minister Nicu Popescu and his Mexican counterpart Marcelo Ebrard.
Taking to Twitter, Jaishankar said, “So glad to meet DPM and FM @nicupopescu
of Moldova. Thanked him for support during #OperationGanga. Appreciate his enthusiasm for expanding our ties. Look forward to seeing him in India soon.”

“A good conversation with FM Rogelio Mayta of Bolivia. Spoke about our development partnership and expanding our economic engagement. Exchanged views on global developments,” Jaishankar tweeted.
He also had a conversation at Colombia University.
Jaishankar has more than 50 official engagements in total. The highlights of Jaishankar’s meetings particularly with developing countries from Asia, Africa, Latin America, the Caribbean and Small Islands are sharply focused on the reform of the UN Security Council.
Jaishankar will address world leaders at the General Assembly on Saturday, after which he will leave for Washington and a meeting with US Secretary of State Antony Blinken. (ANI)