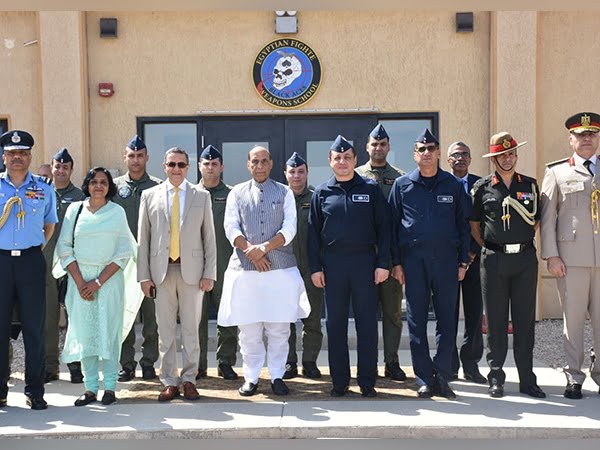 Defence minister Rajnath Singh on Tuesday visited the Cairo West Airbase where he was briefed about the recent engagements of the Indian Air Force with the Egyptian Air Force.

“Defence Min Rajnath Singh visited the Cairo West Airbase today. He was given an overview on recent engagements of Indian Air Force with Egyptian Air Force & briefed on recent Tactical Leadership Programme in which the IAF participated with 3 x Su-30MKI fighter aircraft in July 2022,” the Office of Defence Minister tweeted.

Prior to this, he met the Egyptian Defence Minister, General Mohamed Zaki in Cairo and had wide-ranging discussions on numerous initiatives to further expand bilateral defence engagements.

Singh also signed a Memorandum of Understanding on defence cooperation and said that the move will not only boost ties between India and Egypt but also add new impetus and synergy to the relations between the two countries.

In a tweet, Singh wrote, “Had an excellent meeting with Egypt’s Defence Minister, General Mohamed Zaki in Cairo. We had wide-ranging discussions on several initiatives to further expand bilateral Defence engagements. The signing of the MoU on Defence Cooperation adds new impetus and synergy to our relations.”

Rajnath Singh is on a three-day visit to Egypt starting on Sunday to further extend defence cooperation between the two countries.

Earlier on Monday, Singh called on the President of Egypt Abdel Fattah Al-Sisi in Cairo and both leaders agreed to develop military cooperation further and focus on joint training, defence co-production and maintenance of Egypt is one of the largest investment destinations for India in the region with an existing Indian investment of USD 3.15 billion. Indian companies continue to execute several projects in Egypt.

Defence Minister also acknowledged that Egypt is among the most important trading partners of India in Africa and that bilateral trade has expanded significantly.

He noted with satisfaction the close cooperation in multilateral forums between India and Egypt. Rajnath Singh conveyed his best wishes for the successful hosting of COP27 in November 2022, as per the statement.

On the same day, he paid a visit to the Unknown Soldier Memorial Tomb and laid a wreath paying tribute to the Egyptians and Arabs who lost their lives in the 1973 October War between Israel and a coalition of Arab states led by Egypt and Syria.

The year 2022 is of particular significance since it marks the 75th anniversary of diplomatic relations between India and Egypt.

Egypt is one of the most prominent investment destinations for India in the region with an existing Indian investment of USD 3.15 billion. Indian companies continue to execute several projects in Egypt.

Moreover, to bolster defence cooperation between the two countries, a team of the Indian Air Force arrived in Egypt on June 22 to participate in a bilateral ‘Tactical Leadership Programme’ with the Egyptian Air Force.

Egypt and India also enjoy cordial defence relations. There was close cooperation between the Air Forces, with efforts at jointly developing a fighter aircraft in the 1960s. IAF pilots had also trained Egyptian pilots from the 1960s until 1984. In the recent past, since 2015, there have been several high-level exchanges of visits by defence delegations. (ANI)