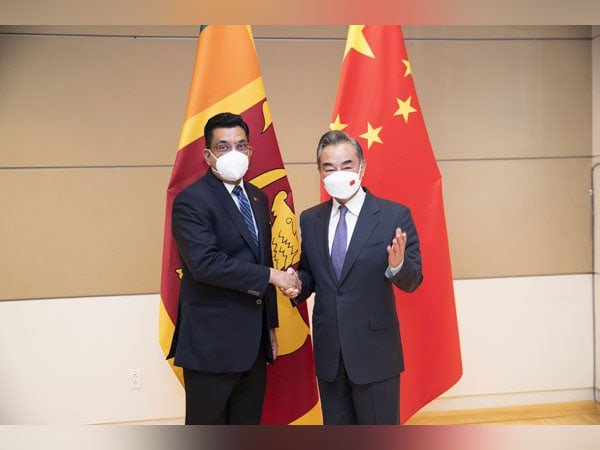 Colombo [Sri Lanka], September 28 (ANI): The ongoing economic crisis and challenges of penetrating the Chinese market are making Sri Lanka cautious about concluding a Free Trade Agreement (FTA) with China, despite pressure.
Recently, Sri Lankan Foreign Minister Ali Sabry and his Chinese counterpart, Wang Yi held a meeting on the sidelines of the UN General Assembly session in New York. The Chinese Embassy said that the two sides had “agreed to speed up the negotiation process and strive for an early conclusion of a Free Trade Agreement (FTA), thereby boosting the confidence in and stabilizing the expectations for their economic and trade cooperation,” Daily Mirror reported.
However, the Sri Lankan minister tweeted about their meeting but there was no trace of the discussion on FTA.
While Sri Lanka has been prevaricating and dragging its feet on the FTA since talks on it began way back in 2015, China has been very keen on it, frequently reiterating it, and even making it a condition for continued financial investments in Sri Lanka.
Even, Qi Zhenhong, the Chinese Ambassador to Sri Lanka, had also discussed the FTA with the then Lankan Foreign Minister GL Peiris. In the press release. Sri Lanka said that China had signed over 26 FTAs, an FTA with Colombo. However, the economic crisis which intensified put paid to that.

Daily Mirror citing EconomyNext, reported that the real opposition to FTA was from the entrenched Lankan monopolists. China also wanted zero tariffs on 90 per cent of the goods sold to each other as soon as the FTA was signed, while Sri Lanka wanted it to start with zero tariffs on only half of the products concerned and expand gradually over 20 years. Sri Lanka’s demands were reasonable from the point of view of a smaller and less-developed economy.
However, if the Lankan government abandons or toes down its protectionist policy, and if the business community and the entrepreneurial class also stop clamouring for protection, an FTA with China could work to Sri Lanka’s advantage as indeed FTAs with other countries would also do.
Earlier, Chinese Premier Li Keqiang told his Sri Lankan counterpart Mahinda Rajapaksa that China was keen on helping Colombo, however, Beijing, later on, responded differently from their previous statements. This has forced Sri Lanka to change its course to India and IMF.
To China’s dismay, India quickly came up with a USD 4 billion aid package and strengthened its relations with Sri Lanka. China did announce a loan and buyer’s credit totalling USD 2.5 billion, but that was not implemented.
The publication suggests that to make FTA work on the ground, Sri Lankan businessmen should be given practical and up-to-date information on trade opportunities in China by a government institution.
Cultural differences and institutional practices often lead to misunderstandings and miscalculations, the IPS study points out, reported Daily Mirror.
Currently, Sri Lanka is involved in managing the ongoing economic crisis and is unlikely to have the time or inclination to start discussing a complex and controversial issue like an FTA with China. And the same was indicated when Sri Lanka turned silent on the discussion in New York between Ali Sabry and Wang Yi. (ANI)

Rapid growth of China’s nuclear arsenal can be a threat to US, American General warns