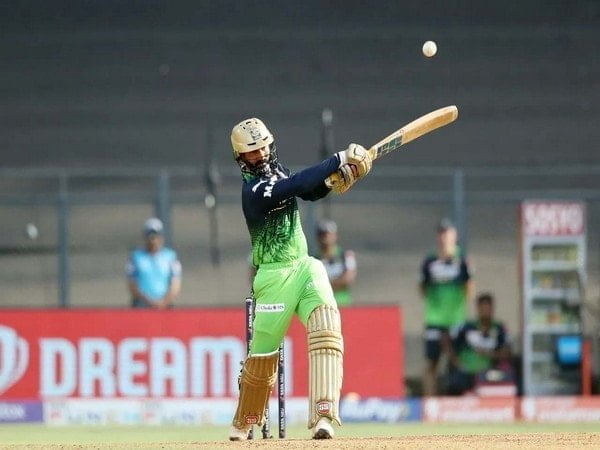 New Delhi [India], September 14 (ANI): Indian veteran wicketkeeper-batter Dinesh Karthik on Wednesday thanked his Indian Premier League (IPL) franchise Royal Challengers Bangalore for helping him realise his dream of being included in the ICC T20 World Cup 2022.
“Thanks @RCBTweets for bein an integral part of the journey and helping me achieve my dream Most importantly to all the RCB fans who chant RCB, RCB even when am in my blues representing team INDIA, I LOVE YOU GUYS. THANKS @malolanr @CoachHesson SANJAY BANGAR @basu2013 S SRIRAM,” tweeted Karthik in response to a congratulatory message by his franchise after his inclusion in the Indian squad for World Cup.
Karthik last featured for Team India in a T20 World Cup event in 2010. In that event, he played two matches and scored 29 runs at an average of 14.50, with the best score of 16.
Before Royal Challengers Bangalore (RCB) selected him for the IPL 2022, Karthik’s last appearance for India was during the ICC Cricket World Cup 2019. He had a disappointing World Cup with the bat as not only he did not ample chances, but in two innings that he played in three matches, he could score only 14 runs with the best score of just 8.
Following this, he was once again removed from the team. He even started doing commentary during India’s tour of England in 2021.

But his selection in RCB changed his fortunes. He was selected in the team as a finisher and filled in the shoes of legendary South African batter AB de Villiers to a great extent, stitching some valuable stands for his side and providing acceleration to run-rate during the death overs.
He finished his IPL campaign with 330 runs in 16 games at an average of 55.00. Karthik scored one half-century for his side and finished unbeaten 10 times for his side.
Since returning to the India team, he has represented the nation in 17 matches, having scored 193 runs in 14 innings at an average of 21.44. His best score is 55 and one half-century has come out of his bat.
Coming to India’s T20 World Cup squad, pacers Jasprit Bumrah and Harshal Patel have made their return to the national side. Mohammed Shami and Deepak Chahar have been included in the squad for T20 World Cup as standby players.
ICC T20 World Cup will take place this year from October 16 to November 13.
India squad for ICC T20 World Cup: Rohit Sharma (Captain), KL Rahul (vice-captain), Virat Kohli, Suryakumar Yadav, Deepak Hooda, Rishabh Pant (wicket-keeper), Dinesh Karthik (wicket-keeper), Hardik Pandya, R. Ashwin, Yuzvendra Chahal, Axar Patel, Jasprit Bumrah, Bhuvneshwar Kumar, Harshal Patel, Arshdeep Singh. (ANI)

India hits out at Pakistan over remarks at UNHRC, slams ‘unwarranted references’ in OIC statement