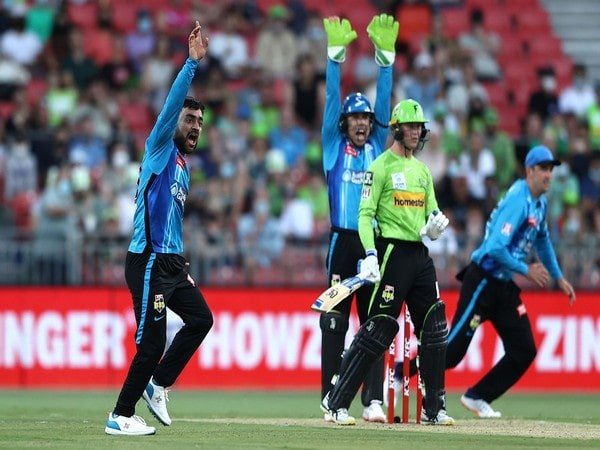 Melbourne [Australia], September 29 (ANI): The Big Bash League (BBL) announced on Thursday that the Decision Review System (DRS) will be introduced in men’s and women’s competitions for the 2022-23 season.
The international and state border closure delayed the plans to implement this technology last year.
It will be available for all matches of men’s competitions and 24 matches of women’s competition. Big Bash officials said that the league will continue to strive for greater DRS coverage in future seasons.
DRS was being used in leagues like the Indian Premier League, The Hundred and leagues in Pakistan, the Caribbean and Bangladesh. Its absence from BBL had become a major talking point over the years. Logistical challenges, significant travel time across the country and different technology providers used by broadcasters meant that it could not be used during the COVID-19 pandemic.
But the league boss Alistair Dobson is confident that these hurdles have been resolved.
“The league is delighted to introduce DRS … in line with the very best cricket competitions in the world. Implementing DRS has been a challenging task for the BBL, which is the most logistically complex T20 league in the world. That, plus the impact of the pandemic on travel and movement, have meant the technology has not been possible to introduce until this season,” cricket.com.au quoted Dobson as saying.
Each team will get one unsuccessful review per innings with fielding team captain or batter having 15 seconds to request for a review. The reviewing team will keep their one unsuccessful review if the decision results in an ‘Umpire’s Call’, as per standard practice. Ultra Edge or Snicko, and ball tracking will be available to TV match officials as tools.
Also, ‘Power Surge’ will be extended to WBBL, while ‘Bash Boost Points’ and X-Factor substitution have been scrapped after being utilised in two seasons.
All matches in both competitions will feature a four-over powerplay at the start of each innings. A two-over ‘Power Surge’ can be called for by batters between over 11-20. During these times, only two fielders may be outside the field restrictions.

ALSO READ:  "No matter how many troops you send to J-K..." Mehbooba Mufti in a message to Centre

Teams will now have to name a standard playing eleven, a 12th player and substitute fielders. As far as points are concerned, they will revert to two points for a win, one for a tie, zero in case of a loss.
There will be also an innings clock in BBL 12 with the fielding team required to start the last over inside 79 minutes (plus allowances) or else they would be able to field only four instead of five fielders outside the restriction circle for the rest of the innings.
But it will not be a part of WBBL.
Dobson feels that introduction of Power Surge to both BBL and BBL and the innings clock were major wins for fans of the league.
“We retain a clear desire to innovate and drive our leagues forward but are also willing to review decisions that have not realised the intended positive impact, such as the Bash Boost point and X-Factor substitution,” he said.
Newly elevated Cricket Australia international panel umpire Phil Gillespie said back in May that they wanted DRS.
“I think it is a lot easier for umpires when there’s DRS in the game because you can move on from that error quickly when it’s been overturned or resolved. As umpires, we all support DRS and want it in our competitions, and it makes us better umpires too,” he had said.
Perth Scorchers’ Laurie Evans also shares this view.
“This game is moving forward quicker than a lot of people realise and there is a lot on the line for a lot of people and an individual decision can change a career. So I think a competition of this magnitude needs to have everything available to it and should be played at the highest level possible so the DRS is one of those things that we are getting used to now as players around the T20 circuit so it’s a great decision to have it,” he said.
The WBBL season opener between Brisbane Heat and Sydney Sixers on October 13 will be the first Big Bash match to have DRS.
Women’s BBL will start from October 13, while Men’s BBL will start on December 13 and will go on till February 4 next year. (ANI)

India, South Africa players to arrive in Guwahati on Sept 29 for Barsapara match