Dulquer Salmaan opens up about working with R Balki in ‘Chup’ 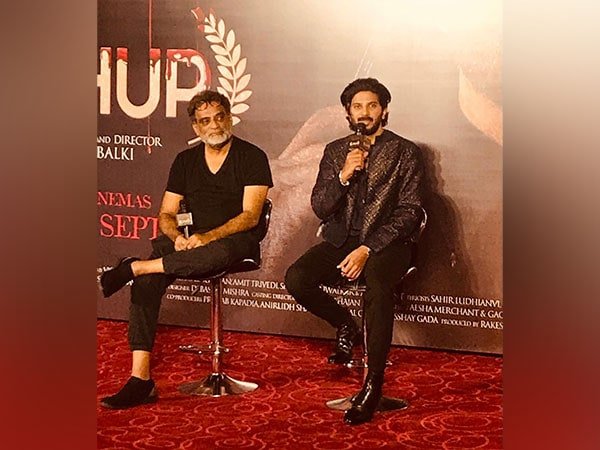 New Delhi [India], September 19 (ANI): Actor Dulquer Salmaan, who is currently basking in the success of ‘Sita Ramam’, will be seen in a different avatar in a thriller ‘Chup: Revenge of the Artist’, which is helmed by none other than R Balki of ‘Pad Man’ and ‘Paa’ fame.
On Monday, Dulquer, along with Balki, paid a visit to the national capital to promote ‘Chup’.
From talking about the making of the film to sharing their takeaways from the film, the director-actor duo left no stone unturned to promote ‘Chup’ with the Delhi media.
Sharing why ‘Chup’ is special for him, Dulquer said, “I do films that pull me out of the film, so even though I listened (heard scripts) of so many films across languages. I felt that ‘Chup’ stood out from all of them.”
He added, “I have read the reviews and comments on the trailer, everybody felt that it was unique. Even my friends and directors in Malayalam (film industry) said this is a terrific idea, none of us thought of this. So that was what I loved about the script.”
Dulquer also spoke about his experience working with Balki.
“Working with Balki sir for me is a dream come true. It is not something, that I ever imagined happening. When I received the call (to work in the film), it was a different excitement. The film script being so interesting was like a double bounce for me. So it was a no-brainer for me to accept the part in this film.”
Apart from Dulquer, the film also stars Sunny Deol, Pooja Bhatt, and Shreya Dhanwanthary in lead roles. The film is touted as a romantic psychopath thriller. It is said that the film is a homage to master filmmaker Guru Dutt and his 1959 classic ‘Kaagaz Ke Phool’.
Another thing keeping the fans excited is megastar Amitabh Bachchan’s association with the film. Amitabh has marked his debut as a music composer in the film.
‘Chup’ is all set to hit the theatres on September 23, 2022. (ANI)